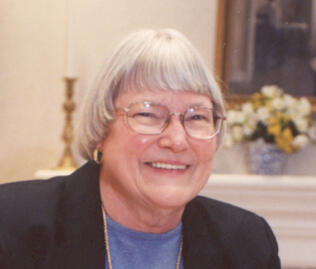 Helen Varney Burst is Professor Emerita at YSN. Ms. Burst directed nurse-midwifery education programs at the University of Mississippi Medical Center, the Medical University of South Carolina, and Yale University and served as a consultant to many others. She was co-originator of the mastery learning modular curriculum design for nurse-midwifery education; developed the nurse-midwifery management process and the Circle of Safety; is an Editorial Consultant (history) to the Journal of Midwifery & Women’s Health, is the author of the first textbook for nurse-midwives in the Americas (1980) now in its fifth edition as Varney’s Midwifery, and used in a number of other countries.

She served the American College of Nurse-Midwives (ACNM) in numerous capacities including two terms as President (1977-1979-1981), Secretary (1972-1974), Chair of the Bylaws Committee (1970-1972), Chair of the Work Group on Bylaws Revision (2007-2008), Chair of the Ad Hoc Committee on JCAH/DOD, Member and Chair (1975) of the Division of Examiners (1960s-1970s), and as Chair of the Division of Accreditation (most of the 1990s). Ms. Burst has also served as the ACNM representative to the International Confederation of Midwives (ICM) as well as to many national interdisciplinary and inter-organizational meetings and advisory groups.

Professor Burst received the ACNM Hattie Hemschemeyer Award in 1982, the 50th year of nurse-midwifery education in this country. She was a member of the founding Board of Governors of the Fellows of the American College of Nurse-Midwives (FACNM) in 1993, is a Distinguished Fellow, and served as Chair from 2005-2008.  She is recipient of alumni awards from all her alma maters: Yale University (MSN, 1963); University of Kansas (BSN, 1961); Kansas State University (BSHE, 1961). In 1987 she received a Doctor in Humane Letters (honoris causa) from Georgetown University.

Ms. Burst has practiced midwifery in a variety of in-patient and out-patient settings and birth locales, was a nurse-midwifery service director in two medical center tertiary hospitals, and was co-founder and president of the Family Childbirth Center in New Haven, Connecticut.

Varney, H. and J. B. Thompson. (2016) A History of Midwifery in the United States: The Midwife Said Fear Not.  New York: Springer Publishing Company.  (ACNM Book of the Year Award, 2016)