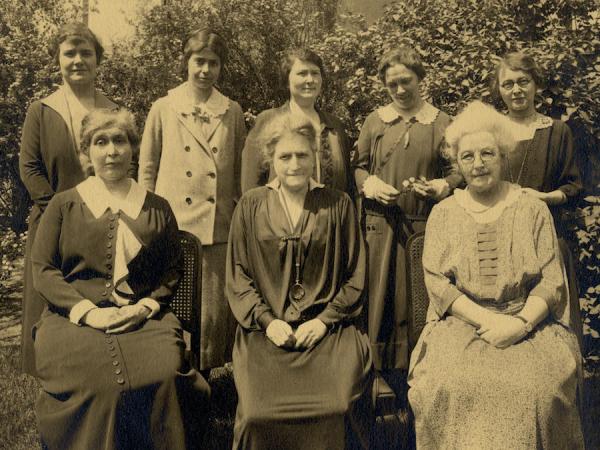 Founded in 1923 with funding through the Rockefeller Foundation, the Yale School of Nursing was the first school within a university to prepare nurses under an educational rather than an apprenticeship program. Annie Warburton Goodrich, the former chief nursing inspector for U.S. Army hospitals during World War I, was appointed as the first dean of YSN and the first female dean ever at Yale.

From the beginning, Goodrich emphasized the importance of social justice and community integration within the curriculum in order to educate future nurses to be “scientifically informed, technically expert, and socially experienced.”

Goodrich enacted several key values, including student clinical experience for education purposes, correlation of theory and clinical practice, nursing education in accord with university academic standards, preparation of nurses in health prevention, as well as curative care in a curriculum that integrate the two concepts, and the case assignment teaching method for clinical experience rather than a series of nursing procedures.

By 1934, Bachelor’s degrees were required for admission and the Yale Corporation authorized the Master of Nursing (MN) degree.  The MN degree was replaced by the Master of Science in Nursing (MSN) degree which began in 1956 and required students to have a prior background in nursing in order to gain entry into the graduate program.  A Certificate in Nurse-Midwifery was also authorized by the Yale Corporation. Clinical specialties in 1956 were maternal-newborn health nursing (which included an option in midwifery), public health nursing, and psychiatric-mental health nursing (the latter two specialties having previously been graduate programs in Yale’s Graduate School).  A Nurse Practitioner track within the MSN degree was established in 1971, and by 1975, YSN offered 10 specialty programs and tracks and was considered the vanguard of nurse practitioner education at the graduate level along with clinical nurse specialists and nurse-midwives.  In 1974, YSN reopened admission for students with no prior background in nursing through its Three-Year Program for Non-Nurse College Graduates. (This is now known as the GEPN program.)