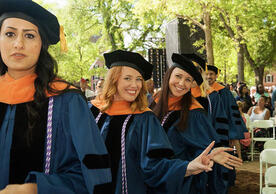 Congratulations to Brighid Gannon for being awarded the Leadership in Nursing Practice Prize which recognizes a graduating DNP student who showed outstanding leadership in the capstone project. Brighid developed an intervention for use with traumatized women in the largest homeless shelter in New York City, navigating the difficult terrain of a large public agency with multiple stakeholders and an intricate landscape with respect to legal, personnel, and human subjects and ethical considerations.