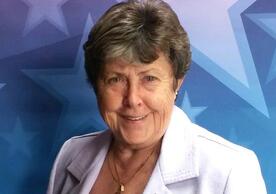 Congratulations to Linda Schwartz ’84 MSN, ’98 DrPH, RN, FAAN, who is being celebrated as a Living Legend by the American Academy of Nursing this year.

“The entire Yale community is thrilled to see her decades of public service recognized with this incredible award, and we all deeply appreciate her commitment to nursing and to our service members.”

Schwartz was a member of the US Air Force from 1967 to 1986 and served on both active duty and as a reservist. She retired in 1986 after sustaining injuries in an aircraft accident while serving as a Flight Nurse. Afterward, she was greatly buoyed by her Yale colleagues, who helped her conduct her research and achieve her degrees as she recovered. In addition to her MSN from Yale School of Nursing (YSN), she also holds a doctorate in public health from Yale School of Medicine.

Throughout her career, Schwartz has shown her instincts as a trailblazer. She became the first woman and the first nurse to be appointed Commissioner of Veterans Affairs in Connecticut. Congresswoman Rosa DeLauro, who has served Connecticut’s third district for nearly 30 years, recognized Schwartz’s incredible impact for veterans in the state.

“Dr. Schwartz has been such a strong advocate for Connecticut veterans, and her leadership on the Rocky Hill project is an especially noteworthy contribution to this community,” DeLauro said.

“The state is lucky to have a nurse and a veteran like Dr. Schwartz, who understands these warriors as only a veteran can.”

In 2003, when Schwartz first arrived, veterans in Rocky Hill still slept in stifling pre-war buildings on beds left over from World War II. As Commissioner, Schwartz secured $50 million in federal grants to improve the facilities. Her outreach program “Have You Ever Served?” raised awareness among health care professionals on the distinct needs of veterans, and the “Oasis Program” established veterans-only drop-in sites at all 12 Connecticut state university sites and 13 community colleges. Under her watch, the facility also developed programs concentrating on mental health including a 24/7 helpline for all Connecticut veterans and their families to assist with emergency care, suicide interventions, and referrals for financial assistance.

Extending beyond the boundaries of the state, Schwartz’s national service has extended to the halls of Congress in Washington, D.C., where she has provided testimony on veterans’ issues to the US House and Senate, the National Academy of Science, the Environmental Protection Agency, and the Department of State.

Among her many accolades, the “Nevertheless, She Persisted” award given by the US National Women’s History Project might best epitomize Schwartz’s firm embrace of new challenges. She has also been honored with the Yale Jefferson Public Service Award by Yale alumni; the Meritorious Service Award from the US Department of Veteran Affairs; the National Commendation Medal of Vietnam Veterans of America for Justice, Integrity, and Meaningful Achievement; and has been inducted into both the Connecticut and Ohio Veterans Halls of Fame. In 2013, President Obama nominated Schwartz to be Assistant Secretary of Veteran Affairs for Policy and Planning.

As a member of the VA Advisory Committee with Women Vietnam Veterans (WVV), Schwartz’s advocacy for the inclusion of women in research studies was tenacious. While conducting research at YSN, she realized how little scientific data addressed the health of women exposed to Agent Orange in Vietnam. Ultimately, her research led to a partnership with counterparts in Vietnam and an international conference hosted by YSN. Throughout the negotiation and preparation, Schwartz smoothed potential missteps and focused both parties on common goals. The sister conference that followed in Hanoi resulted in a memorandum of understanding for joint research between the two countries. It also resulted in American foundation grants to Vietnam for remediation of Agent Orange spray sites. Her work in this area was honored with the Archon Award by Sigma Theta Tau International Honor Society of Nursing.