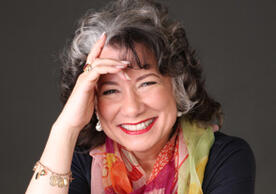 Mark your calendars for Yale School of Nursing’s Creative Writing Wards, to be held on Thursday, April 12 from 5:30 pm - 8:30 pm. The event will be held at the New Haven Lawn Club, 193 Whitney Avenue, New Haven.  This year’s featured speaker is Dr. Gina Barreca.

Dr. Gina Barreca has appeared on 20/20, The Today Show, CNN, the BBC, NPR and Oprah to discuss gender, power, politics, and humor. Her earlier books include the bestselling They Used to Call Me Snow White But I Drifted: Women’s Strategic Use of Humor, It’s Not That I’m Bitter, or How I Learned to Stop Worrying About Visible Panty Lines and Conquered the World, and Babes in Boyland: A Personal History of Coeducation in the Ivy League. Of the other six books she’s written or co-written, several have been translated into to other languages–including Chinese, Spanish, Japanese, and German.  Called “smart and funny” by People magazine and “Very, very funny. For a woman,” by Dave Barry, Gina was deemed a “feminist humor maven” by Ms. Magazine. Novelist Wally Lamb said “Barreca’s prose, in equal measures, is hilarious and humane.” Read more about Gina here.

One of the assignments for Yale nursing students during their first clinical experience is to begin a journal. Through their journal they can watch their own transformation. Through their writing we can understand contemporary nursing and midwifery through the eyes, hands, and feelings of these remarkable students and soon-to-be APRNs.

YSN’s annual Creative Writing Awards are enlivened by the inspirational presence of Professor Linda Honan. Yale nursing students submit their narratives, journal entries, and other creative writing for consideration for one of three significant student awards. This annual gathering, beloved by our community, also features prominent writers and thinkers.