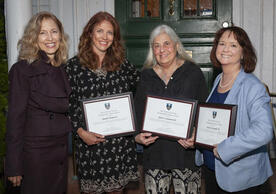 The Yale School of Nursing Alumni Association (YSNAA) celebrated three outstanding YSN grads as the 2019 recipients of the Distinguished Alumni Awards at the Graduate Club in New Haven on May 10. YSNAA Board President Danielle Morgan ’00 MSN, CNS, Family FMHNP, APRN-BC presided over the festivities. 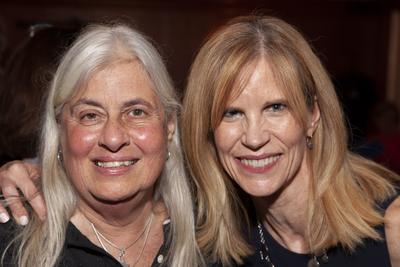 After graduating from Yale, Constantino took a job with the APT Foundation in New Haven, which promotes the recovery of people struggling with substance use disorders or mental illness. She later spent nearly 20 years as the nurse practitioner at Leeway Inc., Connecticut’s first and only nursing home dedicated to AIDS patients.

“YSN also instilled in me the importance of looking beyond our own culture to the health needs of the wider community,” Constantino said. She travels annually to Haiti, where she responded to the earthquake and the cholera epidemic.

Constantino is a member of the American Academy of Nurse Practitioners and Sigma Theta Tau. 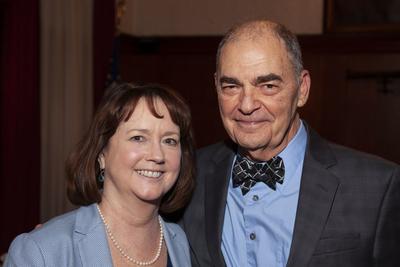 Wailua Brandman ’94 MSN, APRN, PMHCNS/NP, BC, FAANP (right) made the trip from Honolulu to honor Dr. Kris A. McLoughlin ’88 MSN, DNP, APRN, PMHCNS, BC, FAAN (left), the director of nursing for behavioral health services at Parkland Health and Hospital Systems in Dallas, TX. She previously held the position of senior nursing advisor for the Substance Abuse and Mental Health Services Administration, an agency within the U.S. Department of Health and Human Services.

McLoughlin is nationally recognized as a mental health clinical and systems consultant, and she was appointed as a special monitor by the U.S. District Court for a Civil Rights of Institutionalized Persons (CRIPA) case involving the U.S. Department of Justice and the State of Hawaii. It was in this role that she led the rebuilding of the public mental health system in Hawaii.

“One of the things I value the most is my strong foundation as a clinician. It has been the cornerstone for every role I have had in my career, and I have Yale to thank for that,” McLoughlin said.

McLoughlin is a fellow in the American Academy of Nursing and past president of the American Psychiatric Nurses Association. 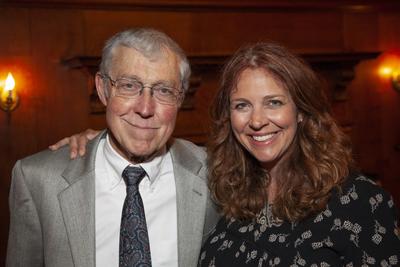 Morgan introduced Dr. Elisabeth “Brie” Thumm ’01 MSN, PhD, CNM, RN, MBA (right). Thumm is the maternal health clinical consultant for the Colorado Department of Public Health and Environment, as well as an adjunct assistant professor at the University of Colorado College of Nursing.

Thumm’s dissertation study was the first national study of burnout among certified nurse midwives, and one of the largest single workforce studies ever conducted. Her research examined how work environments affect the wellbeing of midwives and the health outcomes of their patients, as well as the stability of the midwifery workforce.

“I realized the vast majority of my jobs in my career have been through the YSN network,” Thumm said during her remarks. And being an academic researcher, Thumm had calculated the number as 81.8 percent, to be exact.

“My degree from YSN has been the wisest investment I have made,” Thumm said. Not just for my career, but for the people it has brought into my life. People who truly understand me, support me, and challenged me.”