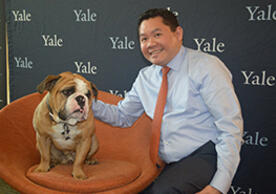 Dr. Aries Limbaga, who graduated from the Yale Doctor of Nursing Practice (DNP) Program in May of 2018, has been appointed as the Chief Executive Officer of Rancho Los Amigos National Rehabilitation Center in Los Angeles, California. Previously, Dr. Limbaga was the Chief Nursing Officer at the Center, responsible for overall nursing practice and administrative oversight.  He was then appointed interim CEO – a position where his leadership and integrity earned him the permanent position as CEO. Dr. Limaga was one of five Yale graduate students interviewed about why they chose the Yale DNP program. The video can be viewed here.

The Yale DNP program has a unique focus on leadership and policy, and is designed for mid-career nurses, like as Dr. Limbaga, who want to become innovative health care leaders.