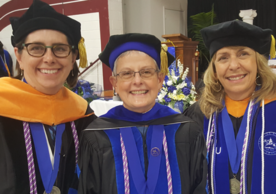 Dr. Holly Powell Kennedy, PhD, CNM, FACNM, FAAN, was the keynote speaker at Frontier Nursing University’s commencement ceremonies on Saturday, October 20 in Hyden, Kentucky. The Helen Varney Professor of Midwifery at the Yale School of Nursing, Dr. Kennedy is an internationally known midwifery researcher and leader.  Dr. Kennedy became the first person to be appointed as the Varney Professor of Midwifery at Yale in 2009. She came to the position with broad experiences as a clinician, researcher, educator, policymaker and leader in a variety of settings. Collectively these experiences have shaped her current vision of academic and clinical scholarship in US maternal-child health care.

She is Past-President of the American College of Nurse-Midwives (ACNM), the professional association representing Certified Nurse-Midwives and Certified Midwives in the US. She received the 2016 Hattie Hemschemeyer Award, the highest honor bestowed by ACNM in recognition of her contributions to research, education, and practice.

“We are so honored to have Dr. Kennedy as the keynote speaker for our commencement ceremony,” said FNU President Dr. Susan Stone. “Dr. Kennedy’s story is inspiring and sets an example of service and leadership for all of our graduates to follow.”

Dr. Kennedy received a diploma in nursing from Miami Valley Hospital School of Nursing, Dayton, Ohio, a bachelor’s degree from Chaminade University, Honolulu, HI, a master’s degree as a family nurse practitioner from the Medical College of Georgia, a certificate of midwifery from the Frontier School of Midwifery & Family Nursing, Hyden, KY, and a PhD in nursing from the University of Rhode Island. She has held academic positions at the University of Rhode Island and most recently at the University of California San Francisco. She holds a visiting faculty appointment at King’s College London where she was a Fulbright Distinguished Fellow in 2008.