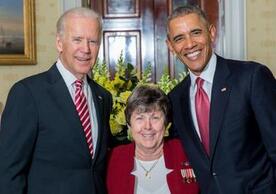 Congratulations to Dr. Linda Schwartz, YSN alumnus and associate clinical professor of nursing, who will be one of three recipients of the prestigious Yale Jefferson Award for Public Service, given annually at Yale to recognize those who inspire the Yale community through innovative, impactful, and sustained service for the greater good.

Dr. Schwartz received her Master of Science degree from YSN in 1984 and a Doctorate in Public Health from the Yale School of Medicine in 1998. A Vietnam era veteran, she served in the United States Air Force (USAF) Nurse Corps from 1968 to 1986 (active duty and reserve) until she was medically retired after sustaining spinal cord and brain injuries when the door of her C-141 USAF aircraft was blown off at 30,000 feet. As a disabled veteran, she has worked tirelessly in Connecticut and nationally to improve health care for veterans, including being commissioner of the Connecticut Department of Veterans Affairs from 2003 to 2014 and as the Veterans Affairs assistant secretary for policy and planning in 2014.

Established in 1972 by Jacqueline Kennedy Onassis, U.S. Senator Robert Taft, Jr., and Sam Beard ’61, Jefferson Awards are widely considered to be the “Nobel prizes for public service.” They honor a Yale undergraduate, a student at one of Yale’s professional or graduate schools, and an alumnus.

YSN Dean Ann Kurth in nominating her for the honor commented, “Dr. Schwartz is a highly articulate advocate for citizen soldiers, Veterans, and their families during the current arena of increasing deployments and long-term health problems for returning service members. …As a faculty member at Yale School of Nursing, she has been instrumental in helping our nursing students understand the real world needs of Veterans.”

Photo: Dr. Linda Schwartz with Vice President Joe Biden and President Barack Obama taken at the White House on Memorial Day, 2016, just before going to Arlington Cemetery to place a wreath at the Tomb of the Unknown Soldier.