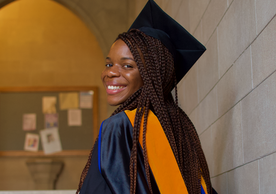 The Charles King, Jr. Memorial Scholars Aid Prize is given annually to a leading graduating student, who has demonstrated outstanding performance in scholarship, research, and clinical practice and who, through accomplishments in and leadership of all aspects of study, has inspired an admiration for professional work. Fanta Bayoh was honored for her commitment to advocating for health justice through the Global Health Justice Partnership. She proved herself a powerful leader, serving as president of Yale’s Black Graduate Student Network, secretary of YSN’s Student Government Organization, and co-founder of the Minority Student Nurses at YSN.

Fanta is also this year’s recipient of the Khalid Lum Leadership Award. In honor of the first full-time Director of the Yale Afro-American Cultural Center at Yale, this prize was established in May 2016 to recognize the efforts of a graduate student who has devoted tremendous leadership to the House and its community. She was acknowledged at Black Graduates’ Celebration during Commencement, where she received a plaque and a $300 award.