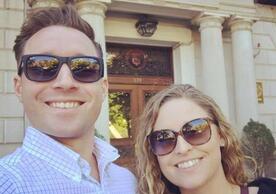 There are three weeks left to give to the 2017-2018 annual fund scholarship campaign. Please consider a gift to help financially support deserving scholars such as James W. Darden IV ’19. Read his story here.

James’s journey to Yale School of Nursing has been quite the adventure. Five years ago, he had just finished his paramedic internship (three months in an emergency room, five months in ambulatory) when it became clear that his true passion was in medicine. He became fascinated with the underlying pathophysiology, and he was unsatisfied with understanding only superficial treatments and modalities. He needed to know more.

James then applied to cell and molecular biology programs and was accepted at the University of Hawaii. In Hawaii, he spent two amazing years on the Big Island, before moving to Chico, CA, and attended California State University after his wife Rachel (a neurology nurse) received a fantastic job offer. Near completion of his degree, James had to make the difficult choice between pursuing nursing or medicine. He ultimately decided that nursing would allow for a superior holistic view of the client, and with the current flux of our health care system, nursing is progressive in its approach to disease. He was accepted into four programs and ultimately chose Yale after the wonderful experience during his interview day.

A few words from James…

“I am currently in my first semester of my specialty year, and I have been enjoying the change of pace from GEPN. The variety of opportunities at Yale are beyond what I could have expected, and I have now found myself extending beyond my previous limits in many different domains. I have been working as a research assistant, teaching assistant, and I have taken on two roles in the student government. My evolution as a student and leader has expanded beyond what I previously thought was possible, and I am grateful for the opportunity and fortune to be attending this program.

My dream as a nurse practitioner is to function as a clinician, leader, and researcher in the realm of orthopedic surgery and sports medicine. Yale is the pinnacle of knowledge pursuit, as is reflected in our motto “Lux et Veritas”, “Light and Truth”. My thirst for knowledge will never be quenched, but I feel in good company every day when I walk through the doors of YSN.”