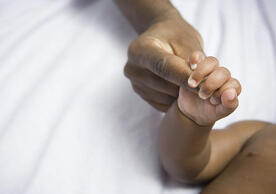 The findings of a study by faculty at the Yale School of Nursing, the Yale Child Study Center, and the Minding the Baby® National Office, were released online today in Pediatrics®, the official journal of the American Academy of Pediatrics ­– the world’s leading pediatrics resource. The full article is accessible online to those with a subscription to the publication (which includes the Yale community, via VPN), and will also appear in the February 2018 print issue of Pediatrics®. It reveals that children from families who received the Minding the Baby® home visiting intervention were significantly less likely to be obese at age 2.

The authors of the study are Monica Ordway, Lois Sadler, Margaret Holland, Arietta Slade, Nancy Close, Linda Mayes – all faculty members at the Yale School of Nursing and the Yale Child Study Center.

Most childhood obesity prevention programs focus on older children, despite the fact that more than half of children with overweight or obesity became overweight before the age of 2. The study, “A Home Visiting Parenting Program and Child Obesity: A Randomized Trial”, shows that children from families who received a home visiting intervention were significantly less likely to be obese at age 2. 158 first-time mothers who lived in medically underserved communities received home visits by a social worker and pediatric nurse on a recommended visit schedule including weekly visits from the third trimester of pregnancy until the child’s first birthday, and bi-weekly through the child’s second birthday. Researchers found that at age 2, 78.3 percent of children who received home visits were at a healthy weight, compared to 63.6 percent in the control group. They found 19.7 percent of children in the control group were obese, compared to 3.3 percent of children who received the visits. Researchers concluded that more research is needed, but home visits could be effective in reducing obesity rates in at-risk populations.

Minding the Baby® (MTB), based at the Yale School of Nursing and the Yale Child Study Center, is an intensive home visiting model intended for first-time young mothers and their families, developed in New Haven, Connecticut in 2002. The interdisciplinary intervention brings together a home visiting team including a pediatric nurse practitioner and a licensed clinical social worker to promote positive health, mental health, life course, and attachment outcomes in babies, mothers, and their families.

More details can also be found on the MedPage Today website.