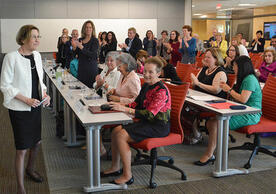 The Yale School of Nursing hosted a symposium and reception this week to honor pioneering hospice, palliative care, and oncology nurse, Dr. Ruth McCorkle – the Florence Schorske Wald Professor of Nursing and Professor of Epidemiology – who is retiring after a distinguished career, the last twenty years of which have been spent at Yale. Attendees came from far and wide, and included many students whose lives she had influenced, as well as several of Ruth’s family members. Speakers hailed from healthcare institutions all over the country, including the Dana Farber Cancer Institute, the University of Pennsylvania, and Michigan State University, as well as from multiple sectors of Yale. The afternoon was moderated by Judith Krauss, former dean of YSN (1985-1998) and professor emerita, and the one who recruited Ruth in 1998. She described Ruth’s life work as having made an “immeasurable and sustained impact on so many lives.” 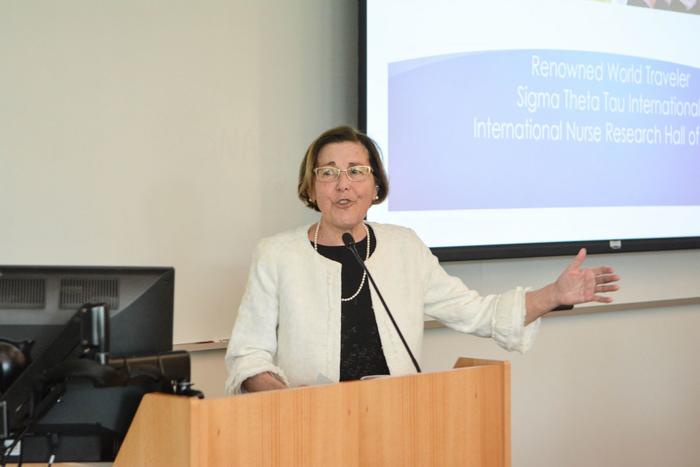 In her remarks, Brenda Nevidjon, chief executive officer of the Oncology Nursing Society, spoke of Ruth’s impact on oncology nursing science throughout the United States and around the world, including in countries as diverse as Zambia and the United Arab Emirates. “You inspire nurses with your expertise, your wit, and your wisdom. Thank you for all you have contributed to the oncology nursing specialty. And thank you for being a friend who has always been generous with yourself to me, and others.”

Mary Cooley, Research Scientist at the Dana Farber Cancer Institute and a former PhD student of Ruth’s at Yale, described her mentor’s notable influence on the science of symptoms and quality of life, highlighting Ruth’s development of the Symptom Distress Scale, which was the first scale to measure patients’ degree of discomfort from a specific symptom. It has become one of the most widely used symptom assessment scales. Ruth has enjoyed constant funding since 1983 to the present day for her research – a “remarkable achievement”, according to Cooley. She also described the breadth of Ruth’s mentoring activities, including over 70 doctoral and 30 post-doctoral students. Cooley portrayed her as a “visionary leader…who has made such an impact on the future of our profession.”

Dr. Regina Cunningham, Chief Executive Officer at the University of Pennsylvania Hospital spoke of Ruth’s numerous contributions to advanced practice oncology nursing, describing her successes, not only in establishing the foundation in cancer nursing, but also in building the scientific case for advanced practice nursing, in oncology, hospice and palliative care, and more broadly, with clarity and rigor to the point that it has now become an increasingly important contribution to health care delivery. Her closing remarks stated, “We stand on the shoulders of a giant, Dr. Ruth McCorkle.”

Barbara Given, Professor Emerita at Michigan State University, talked about Ruth’s wide-ranging contributions to science, the nursing profession, society, and to individuals, as well as her strength in building relationships with other disciplines. Addressing Ruth, she said, “What a wonderful career, what a sustained impact, what a legacy…” 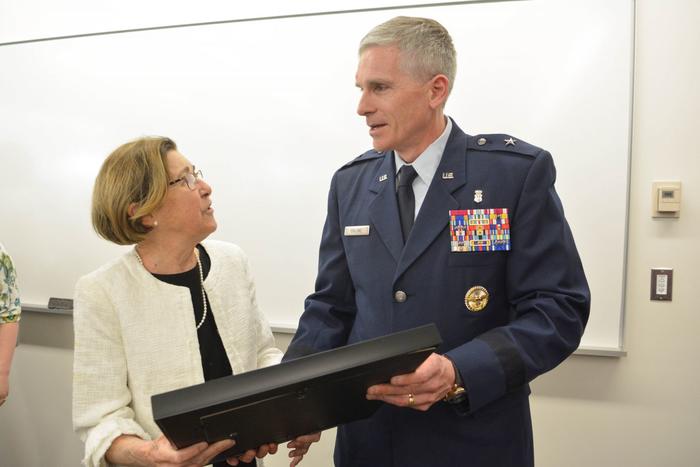 Yale professor Mark Lazenby became an oncology nurse under Ruth’s tutelage at the Yale School of Nursing.  He spoke about her influence on “being human” and how she exemplifies what a “good nurse” is. He spoke of her ability to truly connect with patients – the depth of which came from her exposure to the extremes of human suffering in Vietnam, where she served as a captain in the United States Air Force Nurse Corps. This theme of her life was also reflected in the subject of her thesis, where she chose to focus on the effect of touch for the seriously ill patient. In her particular field of oncology, her passion has been constantly driven by the desire to connect with patients – and for those living with cancer – to help them to optimize life. Ruth has led multiple trials, including one that explored advanced practice intervention for cancer patients resulting in a seven-month survival benefit. This trial revolutionized the field of palliative care, revealing – for the first time ever – that palliative care lengthens life. 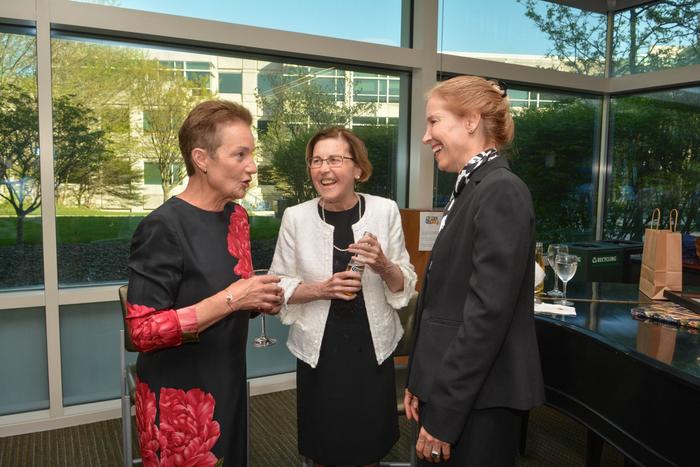 Professor Lazenby ended his tribute by sharing a list of qualities that are foundational to being a “good nurse,” and how each of these has been exemplified by Ruth throughout her career. Respect for all life; Serving society in a time of need; Being present; Improving the quality of life; Preserving personal liberty, even as one is dying; Multidisciplinary care; Mutual respect; Better care for people from diverse and vulnerable populations; Lengthening life; Improving the quality of dying; Evidence-based practice; Collaboration; Gratitude; and hard work.

Ruth’s tenure as the inaugural Florence Schorske Wald Professor of Nursing, was given to her by President Richard Levin seventeen years ago. Dean Ann Kurth commented that such an appointment “speaks for itself”, adding, “A leader in psychosocial oncology, Ruth echoes the pioneering work of Dean Wald by deepening the science, practice, and teaching of palliative and end of life care. In doing so she has enriched not only the field but the lives of countless patients, families, generations of students, mentees and peers.

As Dean Emerita Krauss aptly concluded at the end of the afternoon, in hiring Ruth she had “recruited a history maker.”

As well as being a professor at Yale, Ruth is also the former director of the Center for Excellence in Chronic Illness Care, and she was chair of the Doctor of Nursing Science Program from 1998-2004. She led the program for Cancer Control at the Yale Comprehensive Cancer Center (YCCC) from 1998-2009, and was a professor in the Department of Epidemiology and Public Health at the Yale School of Medicine, and director of Psychosocial Oncology at YCCC. 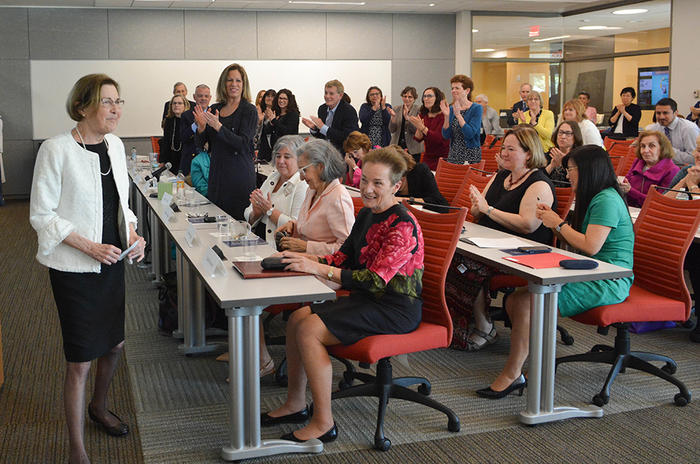 Elected to the National Academy of Medicine of the National Academies of Science in 1990, Ruth has been the recipient of numerous scholarships and awards. Some of her many honors include the Book of the Year Award for Cancer Nursing from the American Journal of Nursing; a Distinguished Merit Award from the International Society of Nurses in Cancer Care; and a Distinguished Research Award from the Oncology Nursing Society. She was named the Nurse Scientist of the Year by the Council of Nurse Researchers of the American Nurses Association, one of the most coveted awards in the field of nursing. In 2009, she received the Bernard Fox Research Award for outstanding contributions to the field of psycho-oncology. Recently, she received the Jimmie Holland Leadership Award from the American Psychosocial Oncology Society, of which she was a president, and the Trish Green Quality of Life Award from the American Cancer Society, and was inducted into the 2014 International Nurse Researcher Hall of Fame, Sigma Theta Tau International Honor Society of Nursing. In January, 2018, Ruth was presented with the Yale Cancer Center (YCC) Lifetime Achievement Award at YCC’s annual Conclave, an award given annually to a YCC member who has impacted the field of oncology both nationally and internationally. Catherine Lyons, RN, MS, presented the award to Ruth, affectionately calling her the “Godmother of Oncology Nursing” and added, “Above all, she is a nurse in the noblest sense of the word, and as a nurse she continually mentors the next generation.”

A prolific writer, her work appears in many professional journals in the US and abroad.