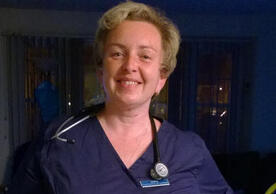 In the final month of the 2017-2018 annual fund scholarship campaign, which provides financial support to deserving scholars, we’re featuring Maria Haslip ’20 as our Yale Nursing student of the week!

Maria was born and raised in St. Petersburg, Russia, where she  received her masters of science in biophysics from Petersburg Polytechnic University and worked in the field of medical genetics. She studied molecular cardiology, and in  2000, received her PhD in biochemistry.

Maria’s university course took six years, the last two years of which she spent working on the molecular biology of cardiovascular diseases. She worked in the first human molecular biology lab in the former Soviet Union. However, she always wanted to pursue opportunities in the United States, eventually fulfilling her dream by taking up a position with the National Institute of Health in 2001. She became a United States citizen in 2012. As well as working at the NIH, she worked at Yale University for ten years, and for a small biotech company developing an immune vaccine against Hepatitis B. She says she has not regretted at all switching her career to nursing, where she can continue her scientific research in a new setting.