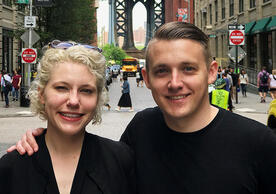 There is one day left to give to the 2017-2018 annual fund scholarship campaign. Please consider a gift to help financially support deserving scholars such as Elliott Race ’18. Read his story here.

Elliott Race ’18 is a recent Master of Science in Nursing (MSN) graduate specialized in adult/geriatric primary care. He grew up in Cleveland, Ohio, with his mother and two younger brothers. He always had a passion for music, specifically percussion, and was involved in his high school and local university groups. He has a BA in music from Kent State University, where he played in the steel drum band and worked with high school students, passing on his musical skills. Elliot then went on to earn his BA in nursing through an accelerated program at Cleveland State University.

Music has brought him many opportunities throughout his life. In high school, Elliot traveled with the marching band to many states. While in New Orleans for the NCAA national football championship game, he did Katrina relief work. In college, he studied with many different musicians across the US and in Latin America. He was also a member of the Kent State fencing team, and during his summers, he helped instruct high school marching bands.

Following his time at Cleveland State, Elliot worked as an RN in cardiovascular surgery at the Cleveland Clinic. Then at the Yale Nursing School, he worked as an RN in the major surgery unit at Bridgeport Hospital.  These experiences, along with motivation from his grandmother, who was one of the first nurse practitioners licensed in Ohio, really impacted his career.

A few words from Elliot…

I chose adult/gerontology primary care because I am passionate about providing care to the adult and aged population, especially in low income areas on the primary care level. I’m very passionate about quality primary care and ensuring that patients get the help they need. I hope to practice in Cleveland, helping the underserved in the downtown area, as well as getting involved in health policy and influencing how healthcare is structured and run throughout the area.

After graduating from Yale School of Nursing, Elliot moved back to Cleveland and started his new job with the Respiratory Institute at the Cleveland Clinic. He also married the love of his life the weekend after graduation!