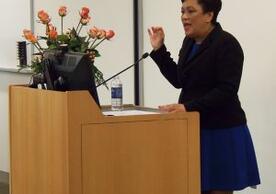 Mayor Harp acknowledged Yale University, in particular YSN nurses, for their commitment to improving the New Haven community. Nurses provide health care to students both inside and outside of school, to families in their primary or specialty care offices, and to the entire community in hospitals. The City of New Haven relies on Yale and YSN to promote change and improve the lives of residents.

“Violence during childhood affects individuals in adulthood,” stated Mayor Harp. Part of her efforts to decrease childhood violence and to improve the overall health of children is to work together with New Haven school communities. Currently, Mayor Harp’s administration is piloting 6:00am-6:00pm school days, which more accurately reflect a modern New Haven family schedule. In addition, Mayor Harp is working on providing mental, dental, and primary health care in each city school.

“Better health yields more energy,” said Mayor Harp. “More energy means more creativity and more growth, which leads to more jobs.” Mayor Harp’s administration is working to make New Haven more attractive to companies and entrepreneurs that might want to move their business to the city. This includes appealing to commuters who wish to ride their bikes or take public transportation to work rather than drive a car. Additionally, Mayor Harp has designated city parks smoking- and tobacco-free areas. In the future, she is looking to create downtown taxis driven by pedal power.

After earning an English degree from Roosevelt University in Chicago, Mayor Harp began working for the American Society of Planning Officials, launching a lifelong interest in urban planning and how cities work. From there, she was recruited to study at Yale’s School of Architecture where she earned a master’s degree.

One of Mayor Harp’s early lessons about the rewards of activism was the result of a social justice matter when she worked for – coincidentally – the City of New Haven. Mayor Harp’s enduring respect for working people and her advocacy for issues important to all citizens has been unwavering.

Mayor Harp’s public service in elected office began first as a member of New Haven’s Board of Aldermen, and then for 21 years, as state Senator for the 10th District. Over time, she earned a reputation as “the conscience of the Senate” at the Connecticut state Capitol.

Mayor Harp has lived in New Haven for more than 40 years and was the Homeless Service Director at the Cornell Scott Hill Health Center for more than 20 years. She is the proud mother of three grown and accomplished children – Djana, Jamil, and Matthew.

Yale School of Nursing enjoys a national and international reputation for excellence in teaching, research, and clinical practice. One of Yale University’s professional schools, YSN is a leading school of nursing in the United States, with a diverse community of scholars and clinicians with a common goal: better health for all people. More information on YSN may be found at nursing.yale.edu.