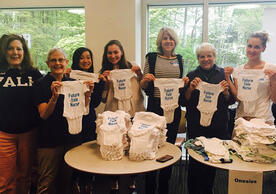 Many Yale students have stories about the professors who inspired them, but few can say that they were at her bedside after she’d given birth, providing postpartum care. Such is the singular life of nursing students. Heather Reynolds ’80 M.S.N., lecturer and minority student coordinator at Yale School of Nursing (YSN), grows emotional when she remembers her teacher, and friend, Christine “Tina” Burke ’76 M.S.N. – whom she, as a nursing student, assisted following the birth of Burke’s daughter, Aubrey.

At the time, Burke was leading the Young Mother’s Program at YSN, which provided prenatal care and delivery services to teenage mothers. “She was always keenly engaged in children and how to stimulate healthy behaviors,” says Reynolds. “Tina was committed to families who were marginalized.”

Burke was also, Reynolds recalled, an active alumna, who regularly traveled back to campus from Colorado — where she had moved to be closer to her daughter and grandson — for alumni meetings. In Colorado, Burke chaired the Yale Day of Service activities and was active in bioethics, supporting the work of the Center for Human Caring in Denver. She received the 2015 Alumni Service Award for her service to YSN’s mission of better health for all people.

“She cared for thousands of women in Connecticut, Washington, D.C., and Colorado,” says Brenda Penner ’76. “She provided care to prostitutes in New Haven back in the late ‘70s. In Denver, she worked with newly immigrated Somali women and developed culturally appropriate protocols. She also spoke Spanish and worked broadly with Hispanic women.”

By the time she received the award, Burke had retired from a 40-year career in nursing and midwifery and had turned her attention to writing children’s stories — self-publishing two books that brought prairie dog characters to life. She had also developed pancreatic cancer, although that, says Reynolds, had little impact on her personality. “She was still so amazingly upbeat,” says Reynolds, when she last saw Burke at the alumni awards event. “She felt privileged to live to see that moment.”

Burke’s passing in October 2015 left an indelible mark on the YSN community. To honor an educator and friend who showed such commitment to the lives of young mothers and babies, the following year the YSN Alumni Association created “Newborns in Need,” a Yale Day of Service event in which volunteers collect items needed for new babies, including diapers, swaddles, socks, and books, to create newborn care packages. Over 50 volunteers will assemble the bags at Yale School of Nursing on May 12 and YSN has partnered with Working Women’s Network, the Child Study Center, and the Department of Pediatrics on the effort. “This brings us together,” says Reynolds.

The mothers receiving the packages — volunteers will assemble about 250 this year — are those being seen in the women’s center at Yale New Haven Hospital’s Saint Raphael Campus, most of whom are on Medicaid or Medicaid-eligible.

“This helps with the things they need in those early months,” Reynolds says. “It helps them get started on the right foot.”

This article was written by Brita Belli and published in YaleNews on May 14, 2018.