Notes from Woodbridge Hall: Research for the World 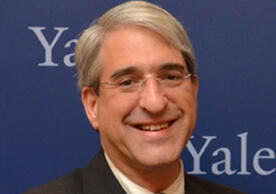 Over the past several weeks we have witnessed—and some of us have experienced firsthand—the destructive, awful power of natural disasters. Harvey and Irma have battered the Gulf Coast, the Caribbean, and the eastern seaboard of the United States. Now residents are struggling to rebuild and regain some of what they have lost.

We have also seen humanity at its most generous and courageous. Reports of first responders and neighbors helping one another give us hope in times of crisis. As I hear stories of medics, firefighters, law enforcement, and servicemen and women, I am also reminded of my own mother, a nurse for fifty years, who passed away last fall.

My mother cared for patients in hospitals and nursing homes. Her patients often suffered with a range of medical and psychological problems, and she put in long hours. Yet being a nurse was one of the great joys in her life. When I became president of Yale, it was her idea for my family to mark the occasion by establishing a scholarship for nursing students at Yale. Nursing meant a great deal to my mother.

Today, the Yale School of Nursing—a superb institution that ranks among the top nursing schools in the country—is preparing 400 full and part-time students for careers helping others and serving their communities. In its Simulation Learning Center, for example, students learn and practice how to care for patients in a wide variety of real-life scenarios—dealing with everything from day-to-day patient care to triage and disaster response. The center, soon to undergo a major expansion and renovation, provides opportunities for students to hone their skills and prepare intellectually and mentally for whatever situation they may face.

Yale is home to some of the most innovative research in the field of nursing. Earlier this year, one of our nursing professors, Jacquelyn Taylor, received a Presidential Early Career Award for Scientists and Engineers from President Barack Obama, the highest honor awarded by the federal government to early-career scientists and engineers, for her research. Nursing faculty often partner with colleagues in Yale’s School of Medicine, School of Public Health, Law School, and Divinity School. Their efforts improve lives in the U.S. and around the world, particularly among our most vulnerable populations.

Nursing also exemplifies the mission of West Campus—Yale’s community dedicated to interdisciplinary research in health, culture, energy, and the environment. Now celebrating its tenth anniversary, West Campus is home to over 1,400 faculty members, staff, and students in seven institutes and the School of Nursing. The entire West Campus is focused on fostering collaborative research that addresses critical challenges in our society.

The Yale Cancer Biology Institute, for example, brings together scientists from across the university who study the underlying causes of cancer. Researchers in the Energy Sciences Institute are actively trying to solve the world’s energy crisis by developing new solutions to environmental and energy-related challenges. In a different vein, the Institute for the Preservation of Cultural Heritage deploys the expertise of scientists, art conservators, historians, and anthropologists to understand, protect, and preserve the world’s treasures.

It is amazing how much West Campus has grown and thrived in the past ten years. Its seven institutes, along with the School of Nursing, apply Yale’s world-class research strengths to solve pressing problems that affect millions of people. The research taking place at West Campus underlines Yale’s vital role in the world and mission to educate leaders who serve all sectors of society.

Whether our own work is aimed at curing cancer, protecting the environment, healing people, or strengthening communities, all of us share in Yale’s mission to create knowledge and develop insights that benefit humanity. It is also an aspiration that my mother, like so many other nurses and caregivers, believed in deeply. In troubling times or when disaster strikes, I know we can look to such people of knowledge, goodwill, and dedication to see us through.