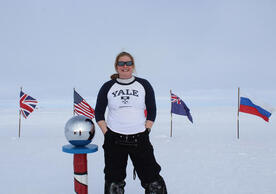 Jaime Hensel ’13 MSN has snorkeled on the Great Barrier Reef in Australia and explored the lush natural beauty of New Zealand. She has waited for giraffes and baby elephants to cross the road while in South Africa and wandered through the labyrinthine medinas of Morocco. Her air miles have taken her through the halls of the Alhambra in Spain and across the canals of Venice. On all these journeys she never forgot her nursing and commitment to understanding the people in the places she has been.

After college and before coming to Yale Nursing, Hensel sailed as a deckhand and educator on several tall ships. A shipmate on a boat in Seattle had grown tremendously from her experience with the U.S. Antarctic Program (USAP), which is managed by the National Science Foundation. Hensel was intrigued. The firsthand report stuck with Hensel and inspired her to start applying every year after she graduated from Yale School of Nursing to the USAP to serve as their on-site family nurse practitioner. 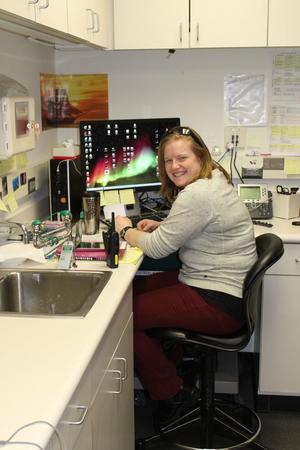 Perhaps unsurprisingly for practicing in one of the most remote environments on the planet, new grads are not typically hired to work in Antarctica. Hensel practiced for several years at Country Doctor Community Clinic in Seattle, a federally qualified health center (FQHC), where she gained experience in primary care and urgent care in a low-resource setting. She continued to apply to work for the USAP, and after four years was finally successful in securing a position in Antarctica.

USAP contracts with the University of Texas Medical Branch to provide clinical staff for all three of the permanent research stations in Antarctica. A week of training in Galveston, Texas, in August 2017 covered what equipment to expect, how to use the x-ray and lab machines, some basic dental training, and lots of tips on providing remote medicine in an austere and unique environment. Then she packed up, set her bills to autopay, and flew to the Southern Hemisphere.

After a stop for gear in New Zealand—including the iconic “Big Red” jackets—Hensel climbed aboard a C-17 for her trip to McMurdo Station in Antarctica. Many Antarctic journeys end here, at the largest of the continent’s three stations, but Hensel still had miles to go before she reached Amundsen-Scott South Pole Station. This facility is more than 800 miles inland (no penguins here) and perched atop a massive pile of 300 feet of land and 9,000 feet of snow.

The Antarctic sun rises in September and sets in March, and travel must be coordinated carefully with weather conditions. Hensel spent two austral summers at the Pole (2017-18 and 2018-19), which runs from about Halloween to Valentine’s Day each year.

The Pole clinical staff work in teams of two, usually one ER doctor and one Physician Assistant (PA) or Nurse Practitioner (NP), and they serve a population of up to 160 people. Everyone traveling to the Pole must undergo rigorous physical assessments before making the trip. Many medical issues seen as the Pole are mild and can be anticipated. The most serious illnesses Hensel treated were related to altitude, including mountain sickness and high-altitude pulmonary edema. During her two summers, Hensel medevacked multiple patients out of Antarctica.

The clinic was open 7:30 a.m. to 5:30 p.m. Monday through Saturday. Hensel and the physician—Dr. Rich Harper the first summer, and Dr. John Rose the second—traded on-call duties. Beyond clinical responsibilities, Hensel also became engaged in the scientific work of the station. Hensel’s office, for example, doubled as the lab space. Strong internet service was limited to about three hours per day, so daily duties included timing when to make phone calls, write emails, and send x-rays to be read in Texas if needed. 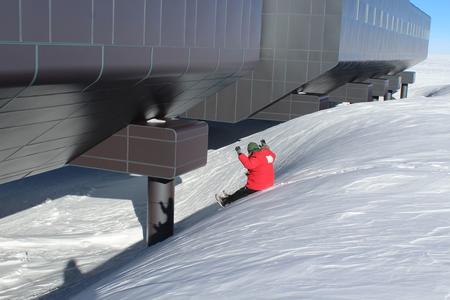 Hensel describes downtime at the Pole as “a lot of make-your-own-fun.” That included cross country skiing, the “Race Around the World” run, bottling souvenir samples of the cleanest air on earth, and releasing weather balloons with the resident NOAA team. Hensel also rang in the new years of 2018 and 2019 with the Geographic Pole marker ceremony. The ice drifts about 30 feet per year and the Pole marker with it, so the identifier gets repositioned every January 1. Given global warming, shifts in Antarctic ice are accelerating, a worrying trend.

While standing at the Geographic Pole this year, Hensel experienced a real Wow Moment. With hundreds of miles of snowscape laid out in every direction, she realized: “I am literally the farthest south nurse in the entire world. On the entire planet. And I can say that definitively.”

Remember that tall boat Hensel crewed out of Seattle? It’s called Adventuress. And for someone who provides clinical care on an ice floe, helps collect weather data in an era of climate change, and uses NP skills to support a community planted at the bottom of the earth, that sounds about right.