Quick-Acting Yale Nurses Save a Life, Lauded by Yale Police 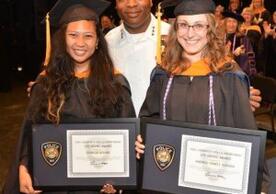 Earlier this month, Arenas and Iversen were walking on a Yale campus tour when an individual, who happened to be a Yale community member, suffered an apparent seizure and subsequent cardiac arrest. Both Iversen and Arenas quickly realized something was wrong and jumped into action at the right moment. Seeing the woman grab her friend’s arm and start falling backward, Iversen was able to catch the individual to prevent her from hitting her head on the pavement. When they recognized that the community member was experiencing cardiac arrest, Iversen and Arenas began administering CPR. After three cycles of compressions and breaths, the community member was revived and showed signs of spontaneous recovery.

“I realize now that it is a good thing I worked as a SICU nurse because I knew exactly what had to be done and how to do it,” explained Iversen. The weekend prior, Iversen had become re-certified in CPR and ACLS. “You never know when you may need to employ basic CPR or first aid skills, but you want to be ready when it needs to be done.”

Arenas acknowledged the training she received at YSN as having prepared her for the incident. “In some ways,” said Arenas, “it was sort of the moment we’d been training for. The last two years at Yale had led up to this moment. When we saw that this woman needed help, it was almost second nature to do everything in our power to take care of her.”

YSN attracts a unique cadre of students. They are talented, motivated, and compassionate individuals who strive to provide the highest quality of health care for everyone. YSN trains the next generation of nurse clinicians and researchers, preparing them with the skills and knowledge to take action when needed. Arenas and Iversen are two prime examples of what it means to be a Yale Nurse.

“It was an honor to be a small part of the YSN Commencement this past Monday,” said Chief Higgins. “It gives us great pleasure when we can honor the heroic efforts and achievements of our community members.”