A Salute to Dean Annie W. Goodrich on the 100th anniversary of the end of World War I 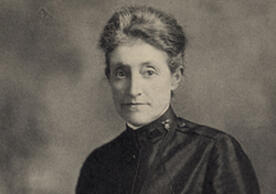 As America and most of Europe prepares to commemorate the end of World War I, much attention is focused on the immense bravery, patriotic fervor, and unimaginable carnage which mark the history of that long and destructive ”War to End All Wars.” With visions of the gallantry of dogfights in the skies over Europe, drudgery of trench warfare, and brutal and indiscriminate attacks on American shipping by enemy submarines, we pause to remember YSN’s founding Dean, Annie Warburton Goodrich and the important role she played in the efforts to assure the best care of the casualties of that war.

Miss Goodrich, as many referred to her, was born in New Jersey but grew up in Hartford, Connecticut. Her father was an insurance executive; her grandfather, John S. Butler, was a psychiatrist and founder of the Institute of Living. When her father died, the family fell on hard times and Annie decided to become self-sufficient and chose—nursing. She entered the New York Hospital Training School for Nurses in 1890 and thus began her lifelong adventure and love for nursing. She held numerous positions in educational institutions, rising to become the New York State Inspector of Schools of Nursing. She also spent time and energy in professional organizations, rising through the ranks to become a highly respected authority on nursing education.

When World War I was declared in Europe July 28, 1914, most Americans steadfastly supported neutrality, isolation and nonaggression to avoid war at any cost. At that time, Annie Goodrich was President of the International Council of Nurses (ICN). Although she was an avowed pacifist, as ICN President she was in touch with what was happening with nursing in the European Theater. Early on, she recognized the importance of being prepared for war. (Werminghaus, 1950, p. 32). After much discussion and planning, Miss Goodrich met with nursing leaders, M. Adelaide Nutting and Lillian Wald to form the National Emergency Committee on Nursing in June of 1917. Their stated purpose was to develop the “wisest methods of meeting the present problems connected with the care of sick and injured in hospitals and homes” and explore strategies to meet the urgent patient and nursing education needs facing the nation”. (Holm, 1982, p. 10).

This work and her stature as President of the American Nurses Association (ANA) resulted in her appointment by the United States Army Surgeon General to be the “Chief Inspecting Nurse of Army Hospitals at Home and Abroad.” Her work included inspecting nursing in the cantonment hospitals in the United States. Her report to the Surgeon General was in sharp negative contrast to the best civilian hospitals of the time. She noted deficiencies in the ”preparation of army nurses, often unable to provide patient care and/or delegating them to less prepared corpsmen.” The Committee eventually recommended to the Surgeon General that an Army School of Nursing be established to help meet this critical need.

In May 1918 when the ANA convention in Cleveland Ohio, America’s soldiers had been heavily involved in the fighting for several months. President Annie Goodrich addressed the meeting, “We have come together in the most momentous period - not in the history of the country but in the history of the world to consecrate ourselves to the service of humanity through our chosen profession” (Kalish & Kalish, p. 3). While the war was indeed the greatest concern, equally important was the proposal for the establishment of the Army School of Nursing, still pending approval in Washington. A bitter battle ensued when the American Red Cross made a counter proposal for use of nurse’s aides instead of educated, prepared, professional nurses. With two diametrically opposing views from the National Emergency Committee on Nursing and the American Red Cross, diplomacy and grit were the order of the day. The proposal for the Army School of Nursing was approved by the delegates with additional approval for a shortened nurses training courses for college graduates (Sarnecky,1995, p. 83). However, the Army School of Nursing was almost derailed because the Surgeon General did not approve the proposal. Determined, Miss Goodrich and a group of influential nurses, including Francis Payne Bolton—a champion of nursing—prevailed and approval was granted.

That August saw the admission of the first class into the school with Miss Goodrich as its first dean. She established a strong curriculum that followed the National League of Nursing criteria. In addition to nursing courses, students also studied military organization, occupational therapy, and applied psychology. She also established student government that reflected her liberal and independent thinking. She believed that “student nurses are citizens, just like everybody else, and are certainly entitled to democratic representation” (Koch, 1951, p. 109). The school continued and not only did the nurses serve the war effort, they also contributed significantly to caring for victims of the Spanish Influenza epidemic. Her service as the Army Nursing School Dean was recognized with the Distinguished Service medal. It also laid the foundation for her next role in founding the Yale School of Nursing in 1923 and becoming the first female dean at Yale University. Her legacy is unending and we, as retired military nurses salute her vision for nursing, and capacity to “to relate the adventure of thought to the adventure of action so that the new social order … may be realized” (Goodrich, 1933).