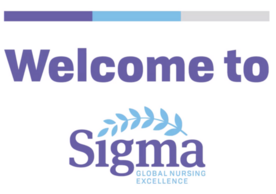 The Yale School of Nursing community gathered virtually on June 3 to celebrate the new inductees of the Delta Mu chapter of the Sigma Theta Tau International honor society.

“Nurses, and the contributions they make—their courage and compassion and commitment to better health for all—are being highlighted, and it is appreciated. But we have always been so.

“This has always been our context: to advocate for those who can’t advocate for themselves; to create systems that address disparities and inequities that depart from our most basic human ideals.”

Guest speaker Jeremy Egner, television editor for the New York Times, wrote a widely read column from his hospital bed in Rhinebeck, New York, about his experiences contracting and recovering from COVID-19 and the role his nurses and other healthcare workers played in his recovery.

“When all you have the strength to do is lie on your back and be cared for, it actually gives you pretty good perspective on nursing as a profession and as a calling,” Egner said. “My nurses were literally my lifeline,” he continued. “They gave me food. They gave me medicine. They helped me bathe. They helped me breathe. But it went even beyond that. When I say ‘lifeline,’ I mean the entire definition of life, not just the mechanics of continuing to physically exist.”

Egner described the emotional support and encouragement he received during his hospital stay, and expressed admiration for how nurses are there in the room for a patient’s toughest and best moments across the lifespan.

“No one bears the kind of witness that nurses do. Nurses are there in our darkest moments. Too many times during this pandemic they are the only ones there, as patients passed away, too contagious for their own families to touch. But nurses are also there in the birthing room, bearing witness to the precious new ones as we welcome them into our world,” Egner said. “Who else can say they are there for the highs and the lows?”

Joanne Iennaco, ’09 PhD, PMHNP-BC, APRN led the induction of the new members, listed below. Joan Kearney, PhD, APRN was also honored at the ceremony and presented with the Dorothy Sexton Mentorship Award.

Congratulations to all the new members!