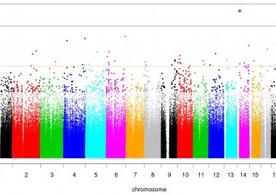 YSN Associate Professor and newly appointed Assistant Dean of Diversity and Inclusion Jacquelyn Taylor, Ph.D., P.N.P.-B.C., R.N., F.A.H.A., F.A.A.N., is lead author of a recent study published in a Nature Publication“Scientific Reports”. The study titled, “A Genome-wide study of blood pressure in African Americans accounting for gene-smoking interaction” focuses on the interaction genetics and the negative of lifestyle behavior of cigarette smoking on increases in blood pressure, specifically in two large epidemiological studies of hypertension genetics—HyperGEN and GENOA, part of the Family Blood Pressure Program.

“This study illuminates the interactive effects of both genomic underpinnings and cigarette smoking have on risk for increases in systolic blood pressure among at risk and understudied populations such as African Americans,” said Dr. Taylor.

A single-nucleotide polymorphism (SNP) is a DNA sequence variation occurring when a single in the genome differs between paired chromosomes in an individual. There are variations between human populations, so a SNP allele that is common in one geographical or ethnic group may be much rarer in another.

Systolic Blood Pressure (SBP) is the amount of pressure that blood exerts on vessels while the heart contracts/or beats. In a blood pressure reading such as 120/80mmHg, SBP is the number on the top. SBP readings of 140mmHg or greater are indicative of hypertension.

This is an important study advancing the knowledge of joint effects of genetics and cigarette smoking on hypertension among African Americans, that also offers a model to the reader for further assessing these risks.

“I am honored to be an integral part of this transdisciplinary team of experts in nursing science, genomics, medicine, and biostatistics with the goal of advancing knowledge in the area of gene-smoking interaction on blood pressure among two large epidemiological studies of African Americans with hypertension in order to provide a model for clinicians for improved assessment of risk and clinical care,” stated Dr. Taylor.

Dr. Taylor is currently in the second year of a $3.4 million grant from the National Institute of Nursing Research investigating the combined association of genomic, epigenomic, and psychological environmental factors on blood pressure among African American mothers and young children.