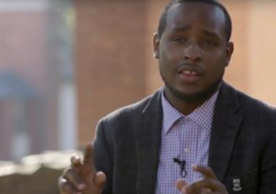 Hear about about the remarkable and inspiring journey of Troy Simon, a joint Yale Nursing/Divinity graduate student at Yale, in this video, shot and produced by The 74’s James Fields.

Troy Simon was a student in New Orleans when the levees broke during Hurricane Katrina. He fled a life in the margins to a temporary school in Houston where, in fifth grade, he learned how to read for the first time.

When he finally returned to school in the newly formed New Orleans Recovery School District, he confronted some difficult choices. “When I saw myself going the wrong way, and I saw my friend dying,” Troy says, “I realized that I was gonna die and I had to make a decision.”

Troy went on to graduate with honors from Bard College. He is currently a graduate student at Yale Divinity School, where he plans to gain skills that he can bring back to his community in order to help others.

Troy’s inspiring story, told here in his own words, is about beating the odds — and the power of a 21st-century education to change lives.