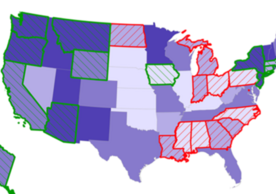 Two recently-published studies highlight the impact of midwifery on future implications for legislation. Dr. Holly Powell Kennedy, Helen Varney professor of midwifery at the Yale School of Nursing, co-authored both papers, and worked in collaboration with two multidisciplinary research teams to achieve the results.

In the first study, Dr. Saraswathi Vedam, associate professor of midwifery at the University of British Columbia (UBC), and a Yale School of Nursing graduate, led a team of  colleagues to develop a U.S. report card that ranks each of the states on the ‘integration of midwifery’ and correlates this ranking with birth outcomes. The midwifery integration score is based on fifty criteria that determine midwives’ availability, scope of practice, and acceptance by other health care providers in each state. States with high midwifery integration, such as Washington and Oregon, generally had better results, while states with the least integration, primarily in the Midwest and South, tended to do worse. Midwife-friendly laws and regulations more often coincided with lower rates of premature births, caesarean deliveries, and newborn deaths. More specific state-by-state information is available at the UBC Birth Lab website.

A Delphi study led by Kennedy, along with colleagues representing the United States Midwifery Education, Regulation, and Association work group, outlines the principles of model midwifery legislation and regulation, in order to optimize full practice authority.

Together, these two studies suggest that the capacity to practice full scope midwifery, and the acceptance of midwifery at the state level, has the potential to improve health outcomes. These improvements could have the greatest effect in states with poor birth outcomes and where midwifery practice is the most restricted or inaccessible.