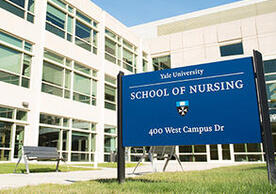 The Yale School of Nursing is delighted to introduce eight new faculty members whose collective expertise will build on the school’s deep teaching and research strengths.

Dr. Samantha Conley graduated from the PhD program at Yale School of Nursing in 2016 and joined the YSN faculty as an assistant professor on July 1. Prior to being at Yale, Dr. Conley completed her MS in community health/family nursing at the University of Michigan, and her BS in nursing from Brigham Young University in Utah. For the last couple of years, she has been a postdoctoral fellow at YSN, where her research focused on the self-management of symptoms in adults with inflammatory bowel disease. In particular, she studied diurnal patterns of activity-rest, melatonin, social cues and symptoms in adults with inflammatory bowel disease, made possible by grant funding from the American Nurses Foundation and the Yale School of Nursing Biobehavioral Laboratory. Her numerous awards and honors include being an IBD Partners Citizen Scientist (2017); a Jonas Nurse Leader Scholar (2014); and a member of Sigma Theta Tau International Honor Society of Nursing.

Dr. Dena Schulman-Green came to Yale School of Nursing in January of 2002 as the recipient of a U.S. Department of Defense Breast Cancer Research Fund Postdoctoral Fellowship Award. She joined the YSN faculty in 2003 and we welcome her as a traditional-track associate professor, beginning September 1. Dr. Schulman-Green is a gerontologist whose research focuses on the timely integration of palliative care into self-management of chronic illness. She earned a BA in psychology from Boston University in 1993, an EdM and a MA in counseling psychology from Columbia University in 1995, and an MS and a PhD in gerontology from the University of Massachusetts in 1999 and 2002. She is active in the American Academy of Hospice and Palliative Medicine and the Palliative Care Research Cooperative and serves on YSN’s Global Health Committee. She acts as a qualitative research consultant both within and outside of Yale, including at Mt. Sinai Hospital in New York City and Harvard University/Hebrew Senior Life.

Dr. Canhua Xiao comes to us from the Nell Hodgson Woodruff School of Nursing at Emory University where she was an assistant professor. Her start with us as a visiting associate professor (while her permanent appointment is being finalized) will begin on September 1. Dr. Xiao’s area of expertise focuses on cancer-related symptoms/symptom clusters and their underlying molecular, genetic, and epigenetic mechanisms, patient-reported outcomes, and quality of life. She has studied fatigue and the role of anti-inflammatory signaling in patients with head and neck cancer. Her current R01 assesses epigenetic mechanism effect on DNA methylation and its association with inflammation and persistent fatigue in head and neck cancer patients. This study also uses an integrative analysis of both epigenetic and gene expression factors in symptom mechanisms.  She completed her post-doctoral fellowship at Emory University; her PhD at the University of Pennsylvania; a MSN at the First Military Medical University School of Nursing in Guangzhou, China; and a BSN at Peking Union Medical College School of Nursing, in Beijing, China. Dr. Xiao’s multiple professional memberships include the International Society for Quality of Life Research (where she is co-chair for the New Investigator SIG), and the Oncology Nursing Society.

Ash Draper is a YSN Midwifery (MW) graduate from 2016. As a USDHHS Nurse Corps Scholar, she worked with Amish, Mennonite, and Native American incarcerated women in an outpatient women’s health care center at the Akwesasne Mohawk Reservation Indian Health Service. Ash started with us in June and will be working 100% at Cornell Smith Hill Health Center and YNHH Saint Raphael’s campus for YSN faculty practice.

Linda Ghampson, originally from Ghana, has worked as an RN since 2005, after completing her MSN nurse educator program from Sacred Heart University in 2015. For the last three years, she has been working at St. Vincent’s College and at Quinnipiac University. On August 1, Linda started working in YSN’s Simulation Lab, while continuing her clinical practice at St. Vincent’s Medical Center, ICU.

Sascha James-Conterelli, DNP, CNM, LM, will start as a full-time lecturer on September 1. Dr. Conterelli was senior director of Graduate Studies at the Harriet Rothkoff Heilbrunn School of Nursing at Long Island University for the past year. She has been a practicing CNM for 17 years, maintaining a clinical practice as well as teaching. Her scholarship focuses on access to health care for vulnerable populations through education to improve maternal-fetal outcomes. As full-time lecturer, she will be teaching 60% (in GEPN maternity and WH) and 40% in MW practice.

Erin Morelli, CNM, transferred from being an M&P staff to faculty on July 1. She graduated from YSN MW in 2002, and in 2007, began working at the YNHHS Center for Women’s Health and Midwifery. In 2014, she became a part-time lecturer in the GEPN midwifery program. Erin has expressed her love for teaching which is why she has transferred to YSN full-time. She will be teaching 80% GEPN and MW, and 20% clinical practice.

Monica Philip, ANP, WH-BC, transferred from YNHH Women’s Center to YSN on July 1. Monica is a bilingual (Spanish-speaking) women’s health practitioner. She has worked internationally in Burundi and across the U.S. including in New Mexico, Washington, D.C. and Connecticut, where she has cared for underserved populations. She will be teaching 50% in MW/WH and 50% in practice at the Women’s Center.