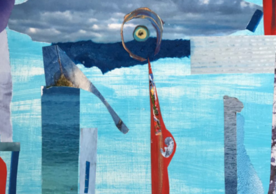 This weekend West Campus will be abuzz with activity as it hosts Artspace’s annual City-Wide Open Studios from Friday 26th at 12 noon, through Sunday afternoon. With a theme of wellbeing, hundreds of artists will feature their work in the building adjacent to the School of Nursing. There will be live performances, food trucks, and many other activities throughout the weekend. For details of all the happenings click here. All are welcome!

One of our own Yale Nursing staff, Andrea Miller, is one of the artists exhibiting her work. Andrea spent much of her adult life working full-time as a fiber artist in her Erector Square studio until she joined the Yale staff in 2009 as a research assistant for Minding the Baby®, a collaboration between the Yale Child Study Center, Yale School of Nursing, and two local community health clinics that provides support (via home visits) to first-time mothers and their families in New Haven. With her new job, Miller had less time for art, and eventually gave up her studio at Erector Square. In time, she also became a grandmother to five children, so her life was pretty full, she says.

But when Miller discovered that the West Campus — where she is based — is the “Alternative Space” site for this year’s CWOS, she was inspired to begin making art again after a nine-year hiatus. This is the first time that CWOS will be held on the campus, although the university has been co-sponsor of the arts extravaganza since it began 21 years ago.

You can read more about Andrea and the Open Studios in this YaleNews article.