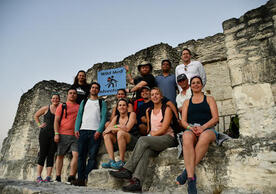 Benjamin Woodard ’21 DNP is an outdoor adventure marketer’s dream come true. Woodard grew up in the gorgeous outdoors of rural New Mexico, camping with his family and learning tracking and survival skills as a teen. Later, he became an avid backpacker and rock climber.

He trained as a cardiac nurse and provided care as an off-duty first responder for casualties on the side of the road, an experience that made him realize he lacked preparation in pre-hospital care. The group rock climbing excursions took on new significance when friends confided how relieved they were to have Woodard around; they were convinced he would know just what to do if something went wrong 100 miles from nowhere.

Woodard began enhancing his skills with a Wilderness Medical Society certification and has also completed a fellowship with the Academy of Wilderness Medicine. He speaks warmly of Advanced Wilderness Life Support (AWLS) courses and describes falling in love with the specialty. He has also served as an instructor for Wild Med Adventures, taking three trips into the Adirondacks and recently returning from a spring break mountain hike in South America.

“Often the wilderness comes to you,” Woodard said. Even an urban environment can change quickly when hit by a tornado or sudden flooding. Other wilderness settings include an oil rig in the middle of the ocean, a military deployment, or the cabins of a kids’ summer camp. A minor injury like an ankle fracture or hypothermia becomes more serious in a remote setting, when the risk assessment can change drastically. “Under those conditions, you still have to do your job without the resources,” Woodard said.

As a DNP student, Woodard is excited to work on developing a curriculum for new nurses and nurse practitioners working in remote settings. This is the project he will concentrate on while studying at YSN. “I am first and foremost an enthusiast for austere challenges, and proud to be a generalist nurse practitioner,” Woodard said.

When reflecting on his career so far, Woodard’s enthusiasm is contagious. “There are so many different wow moments,” Woodard said. But perhaps his most recent was during that spring break trip to Guatemala. The group camped at an elevation of 12,500 feet, high enough that they could look down at the clouds and up at the moon, and in the not-so-far distance, watch an active volcano send plumes of lava 200 feet into the air. For Woodard, it’s just one more reason why he loves doing what he does. For Yale Nursing, another example of a student living our mission of taking care of people…and appreciating the planet on which we depend.