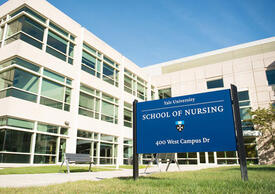 “We are thrilled with this result,” said Dean of YSN Ann Kurth. “To achieve the highest ranking in our nearly 100-year history speaks to an incredible team effort within our school. We are privileged to engage with the highest caliber students, whose curiosity is inspired and encouraged by the pedagogy and research of our outstanding faculty. We are also grateful to all the supporters who believe in our school. And this achievement would also not be possible without the clinicians, scientists, preceptors, and our professional staff who contribute to the work of bringing better health to all people.”

In addition to ascending to the top five overall, YSN’s programs also performed well. The Doctor of Nursing Practice (DNP) program ranked eighth, rising two places since last year. Among the specialties, the Pediatric Nurse Practitioner (PNP) ranked third, up one spot since last year, and the Psychiatric-Mental Health Nurse Practitioner (PMHN) also placed third, a jump of five slots in the past year.

Yale University also offers a PhD in nursing, but USNWR does not rank PhDs.

The complete list of USNWR nursing school rankings can be viewed here, and the ranking methodology is discussed in greater detail here.

Yale Nursing was one of the world’s first nursing schools to be academically-based and will celebrate its centennial in 2023.