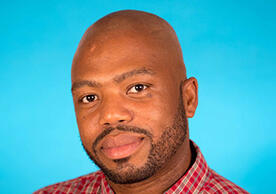 LaRon E. Nelson, PhD, RN, FNP, FNAP, FAAN has been named the inaugural Associate Dean for Global Health & Equity at Yale School of Nursing (YSN) and also joins YSN as an Independence Foundation Associate Professor of Nursing. He is a leading expert in implementation science and HIV prevention within African and African diaspora communities, including communities in the United States, Canada, and Ghana. His current research investigates the implementation and effectiveness of the Client Centered Care Coordination (C4) intervention for supporting the scale-up of HIV pre-exposure prophylaxis (PrEP) as a strategy to reduce the number of new HIV infections among black men who have sex with men in New York and Toronto, Canada.

Dr. Nelson is a family nurse practitioner and Fellow of the National Academies of Practice. He joins YSN from the University of Rochester School of Nursing, where he also received his PhD and was the Dean’s Endowed Fellow in Health Disparities and Associate Director of International Research in the Center for AIDS Research. “Dr. Nelson is a world-class thought leader, and we are fortunate to have him join the YSN community at such an exciting time of innovation in global health research at Yale,” noted Dr. Ann Kurth, Dean and Linda Koch Lorimer Professor at YSN. “Everyone here is thrilled about the opportunity to work with LaRon, and I look forward to the contributions that he will make to my senior leadership team.” Nelson is also the inaugural Ontario HIV Treatment Network Research Chair in Program Science with African, Caribbean, and Black Communities, based at Li Ka Shing Knowledge Institute at St. Michael’s Hospital in Toronto, Canada.

Dr. Nelson completed post-doctoral training with the HIV Prevention Trials Network Scholars Program and was a Visiting Professor at the University of California, San Francisco Center for AIDS Prevention Studies. He previously served as Assistant Dean for Global and Community Affairs at the University of South Florida College of Nursing. Nelson commented, “Even beyond the school’s impeccable reputation for cutting-edge science, I was compelled by YSN’s foundational value of growing a more diverse and inclusive community of students, faculty, and staff. Dean Kurth is transforming the school to not only lead in today’s world, but to prepare advanced practice nurses to lead in the world of tomorrow. I couldn’t resist the opportunity to be a part of what she is building here.”

In 2017 Dr. Nelson was named a Fellow of the American Academy of Nursing and one of Canada’s Rising Star in Global Health in 2012 by Grand Challenges Canada. At YSN, Dr. Nelson’s portfolio includes the Office of Global Health and the Office of Diversity, Equity, and Inclusion (DEI), including the creation of a DEI Council for the school.