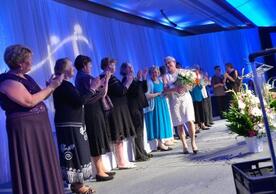 The American College of Nurse-Midwives (ACNM) honored Yale School of Nursing Executive Deputy Dean, Holly Powell Kennedy, with the Hattie Hemschemeyer Award during the 61st Annual Meeting and Exhibition in Albuquerque, NM. The Award is ACNM’s highest honor. This award in the midwifery community is analogous to the “Living Legend” award given by the Academy of Nursing.

The Hattie Hemschemeyer Award, named in honor of ACNM’s first president and a pioneer of the profession, is ACNM’s most prestigious award and is given annually to an ACNM member who has been certified for at least 10 years and has made continuous outstanding and/or historically significant contributions to midwifery, ACNM, and/or maternal child health. The letters of nomination noted Dr. Kennedy significant contributions across all areas, recognizing her research and ability to connect the midwifery and obstetrical communities across the United States.

“It is humbling to be honored for the work you love,” said Dr. Kennedy. “I extend my grateful thanks to the ‘village’ that is midwifery and who have given so much to me over the years.”

Currently YSN’s Executive Deputy Dean, Dr. Kennedy is an internationally known midwifery researcher and the first person to be appointed as the Varney Professor of Midwifery at Yale in 2009. Past-President of ACNM, she came to the position with broad experiences as a clinician, researcher, educator, policymaker, and leader in a variety of settings. Collectively these experiences have shaped her current vision of academic and clinical scholarship in U.S. maternal-child health care. Her program of research is rooted in her clinical and educational experiences during which she was challenged by a prevailing lack of trust in and fear of childbirth. Dr. Kennedy is committed through her research to understanding the links between how care is provided during pregnancy and birth with clinical and social outcomes.

Dr. Kennedy is the second YSN recipient of the Hattie Award. In 1982, ACNM presented the award to Helen Varney Burst, Professor Emerita. This year, Ms. Burst was honored alongside Joyce E. Thompson with the Best Book of the Year Award forA History of Midwifery in the United States: The Midwife Said Fear Not. Well known throughout the midwifery profession, Burst is author of Varney’s Midwifery, often referred to as the “bible” of midwifery. Ms. Burst also wrote Yale University School of Nursing: A brief history, a comprehensive overview of the history of YSN.

In addition to Dr. Kennedy and Ms. Burst’s awards that night, YSN student Allison Lawrence ’17 received the Christine Nuger CNM Memorial Scholarship, and YSN clinical instructor and member of the midwifery faculty practice Michelle Telfer was named a preceptor of the year.

About ACNM
The American College of Nurse-Midwives (ACNM) is the professional association that represents certified nurse-midwives (CNMs) and certified midwives (CMs) in the United States. ACNM promotes excellence in midwifery education, clinical practice, and research. With roots dating to 1929, its members are primary care providers for women throughout the lifespan, with a special emphasis on pregnancy, childbirth, and gynecologic and reproductive health. ACNM provides research, administers and promotes continuing education programs, establishes clinical practice standards, and creates liaisons with state and federal agencies and members of Congress to increase the visibility and recognition of midwifery care.