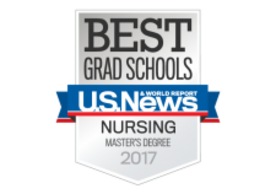 Yale School of Nursing (YSN) is among the top 20 best graduate schools in the country, according to the latest rankings by U.S. News & World Report. Yale Nursing rose three positions from its ranking last year, reflecting its comprehensive work to expand research opportunities and continued growth in the strong academic profile of its entering students.

In addition to the top 20 tier overall ranking, the school’s midwifery specialty had the second-highest score nationally as ranked by peer institutions. Yale School of Nursing’s psychiatric-mental health specialty ranked sixth, and its pediatric nurse practitioner specialty came in at fifth in a three-way tie. Yale’s School of Nursing remains among the most selective in the nation, with only 29% of applicants accepted.

“Yale School of Nursing has always contributed mightily both to the national health workforce and to conversations about healthcare access,” said YSN Dean Ann Kurth. “Especially at this time of health reform, YSN’s education of outstanding advanced practice nurses is critical and it is gratifying that that excellence is acknowledged.”

YSN’s new Doctor of Nursing Practice (DNP) program ranked 18th in the first-ever U.S. News ranking of DNP programs. Started in 2012, YSN’s DNP program was accredited in the fall of 2014 and graduated its first class of students in the spring of 2015. This innovative program was the first hybrid degree program at Yale University, combining traditional in-person classroom with state-of-the-art web-based learning platforms. DNP programs prepare graduates for the highest level of clinical practice and health system policy impact and are rapidly growing, with more than 200 accredited programs and counting.

Survey data were collected in fall 2014 and early 2015. U.S. News chose to rank master’s programs because they account for the largest graduate enrollment in nursing, with around 500 accredited programs. Nurses with master’s degrees play a vital role in administration, education, and clinical management. This is only the second time the U.S. News ranking of graduate nursing programs have used program statistics or information other than peer assessment to determine rank.

YSN enjoys a national and international reputation for excellence in teaching, research, and clinical practice. One of Yale University’s professional schools, YSN is a leading school of nursing in the United States, with a diverse community of scholars and clinicians with a common goal: better health for all people. More information on YSN may be found at nursing.yale.edu.