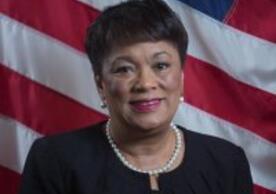 Mayor Harp was raised in Salt Lake City, the youngest of six children. Both parents worked to support the household; Mayor Harp’s tireless work ethic is a function of lessons learned from her parents.

In the 1960s, Mayor Harp moved to the south side of Chicago to attend Roosevelt University. After she earned a degree in English she began working for the American Society of Planning Officials, launching a lifelong interest in urban planning and how cities work. From there, she was recruited to study at Yale’s School of Architecture where she earned a Master’s degree.

Mayor Harp’s public service in elected office began first as a member of New Haven’s Board of Aldermen, and then for 21 years as state Senator for Connecticut’s 10th District. Mayor Harp is now the first woman ever to serve as Mayor of New Haven; she is presently serving her second term.

While in the state Senate Mayor Harp co-chaired the state’s Achievement Gap Task Force to address the undeniable disparity in educational access and performance that exists along ethnic, cultural, and socioeconomic lines. Her recommendations helped the state honor its Constitutional mandate to provide every student an equal educational opportunity and meet its moral obligation to prepare students for responsible, productive lives.

Mayor Harp has lived in New Haven for more than 40 years and was the Homeless Service Director at the Cornell Scott Hill Health Center for more than 20 years. She is the proud mother of three grown and accomplished children—Djana, Jamil, and Matthew.

YSN’s Bellos lecture honors Sybil Palmer Bellos, a public health nurse who graduated from the YSN Class of 1927. Mrs. Bellos served as the Director of the Northern Westchester District Nursing Association and is celebrated for the dedication, vision, and sense of adventure she expressed throughout her nursing career. The Bellos lecture, which was established in 1964, allows for accredited individuals to bring vital public health issues to the forefront of discussion.

The traditional Wisser Tea Reception follows the Bellos Lecture. The reception is an annual tea given by YSN in memory of Eleanor Wisser.