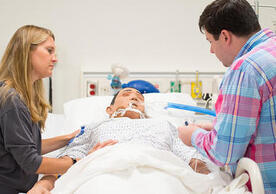 Two Yale School of Nursing (YSN) students stood beside Sophia’s hospital bed as they introduced themselves to the 81-year-old patient. She had fallen the day before at her son’s home, hurting her hip.

“Where is your pain and what does it feel like?” asked one student. Sophia said she thought it was to her left leg. Lifting the sheets, the students took turns tentatively poking at their patient’s purple hip.

“We can give you some morphine,” said one of the students after checking the medical records.

“But I can ONLY take Tylenol!” said Sophia with surprising authority.

Observing these interactions, via video from an adjacent room, was a group of five nursing students. With the help of a checklist, their job was to make observations about what they did or didn’t see happening as their classmates interacted with Sophia.

“OK, this simulation is done,” said a voice over a loudspeaker. “We’ll get everyone together and debrief in five minutes.”

The two students caring for Sophia looked relieved. They patted her head, slightly dislodging her wig, and walked into the hallway of YSN’s simulation space, the location of the staged hospital room and the permanent home of “Sophia”—one of several hi-fidelity manikins used in clinical simulations. The Sim Lab encompasses 5,300 square feet of innovative learning space on the school’s garden level. Here, simulations are taught using interactive, practice-based instruction with the goal of preparing students to transfer classroom learning to the realities of clinical practice.