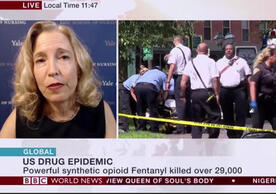 Dean Ann Kurth was one of two people interviewed live on the BBC World News today (8/28/18) regarding the U.S. drug epidemic. Speaking on the challenges of substance misuse as a global problem, Dean Kurth observed that nurses are very often on the front lines in communities suffering from opioid use disorder. She spoke about the recent situation on the New Haven Green which saw almost 100 people being taken to the hospital due to the adulteration of a synthetic drug known as K2.

Dr. Wilson Compton, the Deputy Director for the National Institute on Drug Abuse, was also interviewed, referencing the importance of funding and mentioning Yale’s work in this arena. The BBC clip can be viewed here.

Other recent communications on this topic can be found at the following links:

August 16, 2018: Yale School of Nursing responds to the overdose crisis in New Haven