Back to School: Preparing the YSN Building for Occupants 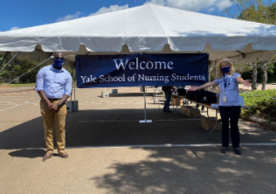 Returning to campus in the COVID-19 era requires abiding by a novel set of social norms like wearing masks in public and maintaining six feet of distance between classmates. But when it comes to the physical spaces of the school itself, safety protocols are even more extensive.

Marcia Thomas, Associate Dean for Finance and Administration, worked sanitized-hand-in-latex-glove with building superintendent Paul Catalano to ensure that YSN’s headquarters at Yale’s West Campus was ready to welcome the community back in person by the time classes resumed on August 31.

“We announced our plan of action on July 1, but the preparation began long before that,” Thomas said. “We have been strategizing how to safely get back into the building ever since we left the building.”

Through a connection made by Yale School of Architecture Associate Dean Phil Bernstein, YSN partnered with Thomas to Apicella + Bunton Architects. The firm worked on occupancy studies pro bono and assembled plans for what the spaces would look like in socially distant arrangements. In addition to architectural recommendations, Thomas and her team juggled guidelines issued by Yale University, the state of Connecticut, and the CDC.

There is a detailed checklist for every space, detailing what needs to be moved in, out, and six feet over. YSN staff oversaw the movement of—literally—hundreds of chairs and other pieces of furniture, ensuring that users can easily maintain a six-foot bubble because a closer seating option doesn’t exist. Furniture pieces that can’t be cleaned easily have been moved to storage.

Plexiglass guards were added to contact areas such as reception and the Simulation spaces, water fountains covered, and hand sanitizer stations and disinfecting wipes are always within your line of sight.

Shared items such as magazines have been removed; even the dry erase board markers that floated among classrooms are now distributed in individual rainbow bundles to each instructor.

Since shared food storage is prohibited, every member of the YSN community was given an insulated YSN lunch bag. Tents were erected in the courtyard behind the building to provide shade and a safe place for people to eat outside.

Yale Environmental Health and Safety (EHS) conducted multiple walkthroughs of both buildings, assessing ventilation and air circulation for occupancy and making adjustments as need to layout and usage of individual areas. EHS also helped ensure that the lighting, security, and plumbing facilities were updated and operational.

As for the folks who are using the buildings, students will adhere to the Yale Community Compact, and faculty and staff will follow the direction of the Statement of Expectations.

“We want everyone to feel safe here,” Thomas said. “In addition to all the alterations to the physical spaces, our guidelines for the YSN community cover everything from building access to elevator use. Preparing YSN to open its doors was a true team effort. Staff from across YSN offices offered their help throughout the summer—coming in early mornings, evenings, and weekends to make sure we were ready on August 31. We will continue to make adjustments as our needs evolve.”