A Legacy of Selflessness: Maximizing Impact at Yale School of Nursing 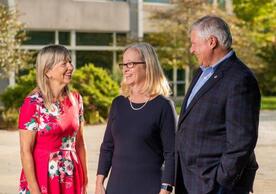 “I’m embarrassed to admit that when I was an undergraduate here, I didn’t even know Yale had a nursing school,” says Tom Naratil, who studied history at Yale College and has spent decades as a financial industry executive.

But when Wendy and Tom’s daughter chose to pursue a career in nursing, it opened their eyes to the challenges facing those in the field.

“We gained so much respect for the rigors of a nursing education and nurses’ deep dedication and altruism,” Wendy Naratil says. “It’s a profession that is fundamentally about taking care of others.”

That selflessness can also come with financial burden. Alumni of the nursing school graduate with an average debt of $113,445 and average starting salaries of $98,213. Only Yale Law School and Yale School of Medicine students graduate with higher average debts, but those students also have higher projected incomes.

“People pursue nursing to do good, not for personal financial gain,” Wendy says. “Considering the average debt and income for nurses, as well as the smaller alumni base, there’s a real need for donors from other parts of Yale to support the nursing school.”

Along with the clear financial need, the Naratils appreciate the unique strengths of the program at the Yale School of Nursing, as well as an opportunity for their gift to be amplified.

“The nursing school is exceptionally well-equipped to focus on the biggest problems in healthcare, in part because of Yale’s deeply interdisciplinary culture,” Tom says. “Collaborations with the School of Public Health and School of the Environment, for example, make YSN a very special place to formulate innovative solutions to healthcare challenges.”

During the For Humanity campaign, endowed gifts to the Yale School of Nursing unlock an equal amount of unrestricted endowed funds from the university, up to $50 million. (Learn more below.)

“It’s really encouraging and inspiring as a donor to hear that what we give can activate an equivalent amount for the school, and it highlights Yale’s priorities for fundraising in a way that is helpful when choosing how to give,” Wendy says. “It’s great to see the university recognizing the importance of the nursing school.”

The inaugural Wendy U. and Thomas C. Naratil Professor is Nancy Banasiak, who holds YSN’s first clinical professorship and leads the Pediatric Nurse Practitioner-Acute Care specialty, which was introduced at YSN in the fall of 2021. The specialty prepares graduates to provide care to patients with acute, chronic, complex, and critical health conditions from infancy to adolescence.

“We are one of only two programs in New England offering this certification, and it’s so important because there are not enough people with training in acute care working in our hospitals,” Banasiak says. “Our nurse practitioners provide the highest level of evidence-based, culturally aware, and family-centered care. Hospitals are desperate for more nurses with this training and Yale is helping to meet that need.”

The program is exactly the type of work that the Naratils hoped to support with their donation.

“Acute pediatrics is really a gap in a lot of healthcare systems, and this specialized education isn’t as widely available as it needs to be,” Tom says. “Yale is fulfilling a broader societal mission by giving a new generation of nurse practitioners this specialized skill set, and having an endowed professorship in this area helps confirm the importance of acute pediatric care.”

An Opportunity to Unlock Funds for the Yale School of Nursing

During the For Humanity campaign, you have a special opportunity to amplify the impact of your gift to YSN. When you make an endowed gift to the school, Yale University will make an equal and unrestricted contribution to the school’s general endowment, up to a total of $50 million. The combined $100 million from donors and the university will make an enormous difference to YSN students—and the field of nursing.

To learn more, contact Gail McCulloch, Associate Dean for Development & Alumni Affairs at Yale School of Nursing at 203.785.7920 or gail.mcculloch@yale.edu.

This story originally appeared in For Humanity: The Yale Campaign.