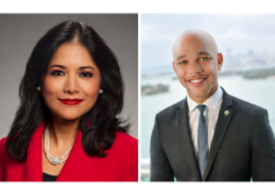 Lydia Cristobal ’16 DNP (left) and Stephan Davis ’16 DNP (right) have both been appointed to serve on the Yale Alumni Association (YAA) Board. Dr. Cristobal, who currently serves as the YAA Assembly Appointed At-Large Delegate, takes on the additional role of a YAA Board of Governors Representative, and Dr. Davis serves as one of three YAA Delegates for YSN.

The delegate role is essential to Yale’s mission of actively engaging alumni. The primary responsibility is to represent YSN Alumni Association (YSNAA) at Yale’s Assembly and Convocation event, typically held in November. The annual Assembly offers a behind-the-scenes look at various aspects of the University’s work, as well as hands-on leadership training to help volunteers’ efforts with YSN’s alumni body.

Delegates also provide a vital link between Yale and its alumni by bringing questions and issues of concern back to campus through the Assembly, and then communicating back to other alumni what they have learned.

The YAA Board of Governors sets the direction and goals for the YAA Assembly delegation and the association at large. The board leads alumni initiatives, recognizes outstanding volunteers and organizations through several award programs, and helps to build the leadership pipeline for the university as a whole.

If you are interested in exploring how you can be involved with the YAA or YSNAA Board, please contact Charlyn Paradis in Alumni Affairs at charlyn.paradis@yale.edu.