YSN’s Dean Kurth Reflects on School’s Past, Looks Ahead to Centennial 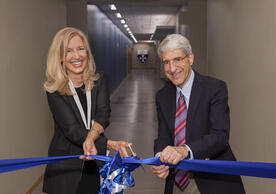 After seven years leading Yale School of Nursing (YSN), Dean Ann Kurth ’90 MSN, PhD, CNM, MPH, FAAN, FACNM departs on December 31 for the top leadership post at the New York Academy of Medicine. She is the first nurse and first epidemiologist to hold the position in the organization’s 175-year existence.

During her time as dean, working with committed faculty and staff, Dean Kurth doubled the school’s budget, increased fundraising, and ushered in the school’s highest ranking in its history. She formed the Dean’s Leadership Council of donors and advisors and welcomed more BIPOC faculty and students to the school, contributing to a more representative YSN community than ever before. She co-founded the Yale Institute for Global Health, a partnership with Yale School of Medicine and Yale School of Public Health. She also cut the ribbon on the school’s 8,000-square-foot expansion of the state-of-the-art Simulation Lab and classroom space.

Earlier this year, the university announced an historic commitment to YSN: $50 million in endowed funds that will be unlocked after YSN raises a matching amount of endowed support. Now known as the Yale Challenge, the effort is a robust infusion of confidence and resources for a self-support graduate school.

Dean’s Kurth’s leadership took place within a media environment where, as of 2018, nurses were identified as sources in only 2% of stories in health news outlets. When nurses were quoted, it was often about the profession itself rather than clinical expertise, decades of research experience, or innovative life-saving and life-improving care models.

Dean Kurth recently paused to reflect on the years of her deanship, the unique attributes of a Yale Nurse and a Yale Midwife, and how the school is well-positioned for its second century of outstanding contribution starting in the centennial year of 2023.

How did you decide to begin a professional career in nursing?

I grew up in a small town in New Hampshire, and my father ran his practice as a physician from our home. Our front hall was the patient reception area, and my mother was the nurse in the practice. It was an old-school delivery model and served as my introduction to primary care. Later our family provided care in a wide variety of settings, including on the Navajo nation lands and in Latin America. It was so clear that healthcare is a defining human need and should be delivered as a universal right.

My midwifery interest was influenced by the fact that my maternal great grandmother died post-partum in Slovakia after her third child. I always heard that story growing up and sadly, have heard it around our own country and the world today — avoidable maternal death and racial disparities in mortality is something on which many of our faculty focus.

When I learned about and entered YSN’s graduate entry program, I had found the grounding for a life’s work, and have always been grateful to Yale and to YSN for that.

You were Princeton University’s first recipient of the Henry R. Labouisse/Eve Curie Research Fellowship, for work in East Africa. How did it shape your research on HIV and global health?

Engagement in HIV work has been a thread since the early days of that pandemic. I knew I was interested in public health but not as a bureaucrat, and I knew I needed to offer something really concrete for the work I wanted to do collaboratively with people in low-resource settings. The HIV pandemic had exploded in the United States by the time I returned from East Africa in the late 1980s, and we could see we were in the throes of a global pandemic.

The HIV pandemic really framed my worldview and educated me, especially seeing the incredible work accomplished by advocates living with HIV. It changed the way I looked at health care. People living with HIV advocated for more research and care, they camped out in the labs at NIH and demanded changes to the scientific process, making care a much more participant-centered model. It was very inspiring during a very dark time to see that progress could be made. HIV nurses are among the best human beings I’ve encountered in the world, coming through the crises while maintaining deep commitment to care. I think that crucible will be similar to what our students face today with COVID-19. And our faculty practice and scholarship at YSN, and collaboration through the Yale Institute for Global Health, allow us to work on these issues which are at their core about health equity.

What defines a Yale Nurse and a Yale Midwife? What advice do you have for current YSN students?

There is really something distinctive about the phenotype of a YSN graduate; there is a unique way that Yale nurses and Yale midwives move through the world. Part of it is the ethos that we want better health for everyone. Like all Yalies, our students have a curiosity about the world and want to make a difference, and they take advocacy seriously. They know that part of nursing practice is to advocate for what nursing can do in service to people’s needs, including addressing the structures we all live in that affect health.

COVID-19 has given the public a better idea of what modern nursing is and what nurses actually do, but now that increased recognition needs to translate into structural changes that value nurses in deed, not in words. When I was a student here, we were taught the policy documents. For example, we knew we would have to fight for our evidence-based full scope of practice authority. We saw some of those scope of practice limits on nurses lifted during the emergency of COVID-19, increasing access to high-quality care that decades of evidence consistently show advanced practice registered nurses (APRNs) provide. Groups including the National Governor’s Association and the National Academy of Medicine have been calling for this for years. Our superb faculty are experts in providing that clinical care and in educating the next generation of APRN providers, which is crucial if we are to address today’s urgent health workforce challenges.

My advice to current students is: Don’t lose the passion, don’t lose hope, and don’t lose our humanity along the way. The world is in dire need of healing right now, and we as nurses are crucial to that. Stay human with everyone you meet along the way because everyone has their contribution to make. And we do it better together.

What achievements are you proudest of as dean of YSN?

The school will celebrate its centennial starting in the fall of 2023, and it’s exciting that Yale Nursing will have a new dean then for the start of its new century. I am really grateful for everyone at YSN who worked together to establish a firmer footing for the school heading into its next 100 years. As a self-support school, there are only so many levers you can pull. Tuition covers only half the cost of running the school, and we knew we were turning away outstanding candidates every year. And while we have increased the size of the student population somewhat, we’ve also seen research funding grow with our highly creative faculty.

Remarkably, YSN faculty added several new degrees during the COVID crisis. We’ve also been very blessed to have some incredibly generous donors and partners who have seen the vision for what Yale Nursing contributes at Yale and to the world. That includes the donor support we received for the newest endowed faculty chair, and for our new online master of science in nursing (MSN).

Launching the new Online MSN program allows us to bring a Yale education to the best nursing students no matter where they are — Yale Nursing everywhere. It helps diversify our community so that our graduates can be more representative of their patients. We have more representative cohorts of BIPOC, first-generation, LGBTQI+, and male students than ever before. Ensuring that everyone feels a sense of belonging and of valued contribution of course continues to be a work in progress and we are committed to that journey. We know that having more diverse voices in the room where healthcare decisions are being made is a good thing and that it’s also the right thing.

Nursing began having a national conversation of racial reckoning after the murder of George Floyd, and it’s gratifying to see that every school at Yale now has a DEIB plan. We are educating a generation of students for whom social justice is a bedrock principle. Back in late 2015 as I was coming in as dean, YSN defined ‘diversity’ and created a new office to support it, in 2016 we now have a DEIB plan to guide this work in which we all engage.

You’re closing out YSN’s first century. What’s next for nursing and YSN?

The major challenge in front of us is the climate crisis, which is also a human health crisis, and it is going to take nursing to address that, as nurses and midwives are 60% of the healthcare workforce globally. I’d like to see YSN continue to play a leadership part in that space. In addition to being a huge health challenge, it presents an equity crisis: those who contributed the least to global warming already are being hurt the most by the impact on health. YSN has one of the only Associate Deans for Planetary Health at a school of nursing, and programming  including continuing education about climate change and health in a Yale-Coursera offering that is just launching. Nationally, nursing has now mandated that planetary health principles are part of nursing competencies, and I am glad to see YSN leading in this arena.

We’re going to need to role model how we as nurses can work with every sector and with communities to ameliorate, prevent, and address the climate crisis impacts of extreme weather, heat waves, mental health stresses, displaced populations, and other changes when they happen. I was a Co-chair of Yale’s Sustainability Committee, and we supported President Salovey’s commitment for the university to be carbon neutral,  including how we help our own at-risk coastal city of New Haven. I’m quite proud that Yale did not just announce a target but developed an operational plan to achieve it.

As far as the big picture, there’s always hope. There are many interventions we know can work to green up the environmental footprint for healthcare and to get ready to manage the health needs of people and communities damaged by climate change.

For the near future, I hope the next dean will have support and partnerships to invest in such a way to reduce the debt burden of our students and get closer to the equity goals we’ve been working toward. I think that in our outstanding school’s second century, you’re going to see more sharing of YSN’s assets with the world and a greater appreciation of what nursing clinical practice, research, and service contributes to our university and our world.

It’s humbling to be given the opportunity for a leadership role like a deanship. The school is a complex living community, and none of this ever is done alone. I truly appreciate the resilience that YSN has shown in addressing some of the hardest issues of our century. I have learned so much from everyone across our Yale and Yale Nursing communities. I am grateful for that journey, and I will continue to watch with pride Yale Nursing’s answering the call for a better world.