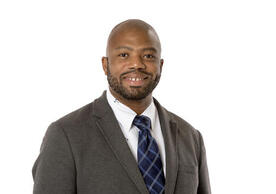 Yale School of Nursing (YSN) Professor Dr. LaRon Nelson, PhD, RN, FNP, FNAP, FNYAM, FAAN is leading a $7 million study funded by the National Institute of Allergy & Infectious Diseases at NIH to address disparities in HIV among Black men who have sex with men (MSM) by studying the effects of a multi-level intervention aiming to address intersecting social and structural barriers that impede population-level reductions in the rates of new HIV infections. The pilot study launched this summer, in the same year that marks four decades since AIDS was first discovered.

“There is a sense of urgency right now,” Dr. Nelson said. “The US has a goal to effectively end the HIV epidemic by 2030. In order to meet that goal, we need serious, bold solutions that match the complexity of the problem and we believe this project is a strong match for those needs.”

Dr. Nelson is co-chairing the study—titled HPTN 096—with a multi-disciplinary team of the HIV Prevention Trials Network (HPTN). The other co-chairs are Dr. Chris Beyrer of Johns Hopkins University Bloomberg School of Public Health and Dr. Robert Remien of Columbia University Department of Psychiatry.

He is also drawing on the expertise of YSN’s Professor of Nursing Dr. David Vlahov, PhD, RN, FAAN, another key member of the HPTN 096 protocol team. “David is providing expertise from his trailblazing work in HIV prevention equity through developing and leveraging academic-community coalitions in Harlem and South Bronx,” Dr. Nelson said.

“LaRon’s study is drawing on the sharpest research and strongest data we have across four decades,” Vlahov said. “He knows that community partners are essential to reaching these populations and reducing the infection rate in a significant way.”

The study takes a community-driven health equity approach to HIV prevention that is status-neutral and uses an implementation science framework. It aims to reduce HIV infection rates by better optimizing the equitable deployment of existing clinical innovations such as HIV testing and Pre-Exposure Prophylaxis (PrEP) that currently are not having an equitable impact on the epidemic among Black MSM, at least in part because of structural barriers.

“Many of the reasons these men do not access treatment are not behavioral,” Dr. Nelson said. “Barriers to care for Black MSM include lack of health insurance or employment, as well as interlocked HIV stigma, homophobia, and anti-Black racism that is institutionalized in healthcare systems.”

Dr. Nelson also pointed to the fragmented healthcare and human services landscape as another barrier to care.

The pilot will start in four cities—two serving as the control and the others receiving the intervention—and run through December 2022. It will be used to test the complex elements of the study and identify any areas needing adjustment. Then the large study will scale up to 14 additional communities throughout the South.

The larger study will be implemented for three years and then use data collected from 3,200 Black MSM to determine the intervention’s efficacy in increasing PrEP use while leveraging CDC surveillance data to determine whether the viral suppression rates have increased among Black MSM living with HIV.

In addition to his work in this area, Dr. Nelson is also the Associate Dean for Global Affairs & Planetary Health, Independence Foundation Professor, and Associate Professor of Nursing at YSN.