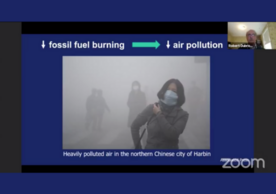 Professor of Epidemiology and Faculty Director of the Yale Center on Climate Change and Health Dr. Rob Dubrow, MD, PhD, described a bleak picture of the planet’s climate future at a virtual talk on October 27 as part of the YSN Planetary Health Speaker Series. Dr. Dubrow’s materials covered “Climate Change Mitigation: Protecting the Health of Current and Future Generations.”

Dr. Dubrow warned against maintaining a business-as-usual approach that maintains current greenhouse gas emissions. Under these conditions, parts of the world will eventually become uninhabitable. Sea level rise will spur abandonment of major coastal cities, outdoor labor productivity will be severely reduced due to the heat, and there will be severe global food insecurity.

“We should have started serious mitigation 30 years ago. We didn’t, but with this, it’s always better late than never,” Dr. Dubrow said.

Effects of warming include a higher frequency and intensity of extreme events such as heat waves, flooding, tropical cyclones and hurricanes, droughts, and wildfires. The severe weather leads to injuries and fatalities.

The Power of Adaptation

Despite the grim foreshadowing, Dr. Dubrow also made recommendations for positive actions that can be taken now. In addition to planting trees, shifting to a more plant-focused diet, and voting, he highlighted several adaptations that can help.

Dr. Dubrow was hopeful when describing mitigation practices. For example, decreasing the burning of fossil fuels also decreases carbon dioxide emissions and decreases toxic air pollutants. Therefore, converting from a fossil fuels economy to one that favors renewable energy will simultaneously help the climate and save millions of lives every year that would otherwise be lost to deadly air pollution.