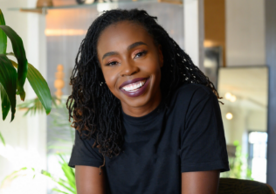 More than 25 people enthusiastically attended the virtual presentation “Becoming a Millionaire While Nursing” with Naseema McElroy, RN, MHA, MSN on February 15. The event is part of an ongoing series of Black History Month programming sponsored by the Yale School of Nursing (YSN) Office of Diversity, Equity, and Inclusion and participants praised it as a standout session. The event was moderated by midwifery/women’s health specialty student Ashleigh Evans ’23 MSN.

McElroy is a labor and delivery nurse in California who has paid off more than $1 million in debt, including about $200,000 from a nursing master’s degree. Other debt was derived from real estate, and after going through two foreclosures and two short sales she filed for bankruptcy.

During the three-year period that she tackled the debt, McElroy also described leaving an abusive marriage and a disastrous work environment. She now has a six-figure net worth and encourages all nurses to shoot for the “Double Comma Club.”

“I am passionate about financial education for everyone, but especially nurses and people of color,” McElroy said. “I think every nurse should retire a millionaire or a multimillionaire.”

She also advocated for building wealth as a way to ultimately be a better nurse. The financial independence means being unafraid to speak up as needed, because there isn’t the fear of losing her job. For McElroy, it has also meant changing her entire family’s financial trajectory and providing a better foundation for her children.

McElroy’s journey to shedding the debt began with educating herself about investing and changing some of her habits. Instead of listening to music while she drove, she switched to podcasts where people shared their personal stories of climbing out of debt.

McElroy considers nursing to the be the ultimate FIRE profession because of the endless job possibilities, great insurance benefits, access to optimizer vehicles like 457s, and the option of semi-retirement. She also touted the ability of nurses to set the terms of their own paychecks by taking on more shifts earlier in their careers or working per diem.

“We have all the levers; we just need to know how to pull them,” McElroy said.

McElroy also familiarized herself with investing, a formerly intimidating topic that she now feels comfortable with and strongly encourages.

McElroy’s advice to students included starting a Roth IRA and contributing as close to the $6,000 annual contribution maximum as possible. She also recommended the book A Simple Path to Wealth by J.L. Collins and the websites Playing With FIRE and Nerd Wallet.

A financial educator, McElroy now hosts her own weekly podcast, Nurses on Fire, where she welcomes guests who share their own financial success stories. She also founded her own website, Financially Intentional, and her book Smart Money is being released in March.

A Month of Programming

In addition to this presentation about how to build wealth while nursing, the slate of Black History Month free programming has also included a session about paying down student loan debt, a virtual talk with two experts about working in Federally Qualified Health Centers (FQHCs), a social event for Black YSN students and alumni, and a Black student mixer on February 20 for a trio of graduate schools: YSN, the Yale School of Public Health, and the Yale School of Medicine.

YSN students are also welcome to join future nurses from throughout the region at the Southern Connecticut Black Nurses Association Open House on February 26.