From the trading floor to the ED: Alum returns to Yale with new calling 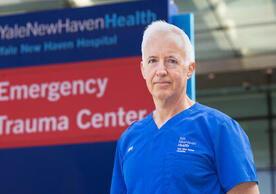 After graduating from Yale School of Management in 1993, Brian Roach spent 18 years in the banking industry. His career included stops in New York City, San Diego, and San Francisco. He worked for several companies — including one that he co-founded and a multinational bank that acquired it.

It was in this last role that Roach found himself deeply unsatisfied; he was well-compensated but found himself feeling unfulfilled. So one day he quit, and over the next few years traveled, worked with a few businesses, and managed his family’s cabinet-making company. But he still wasn’t sure what the next major chapter in his life should be.

Roach spent a summer volunteering with the emergency services team at Grand Canyon National Park, but to continue working with them, he needed to become an emergency medical technician (EMT). While EMT school was supposed to get Roach back to the Grand Canyon, it would instead kick off a series of events that led him all the way back to New Haven.

On the first day of EMT training in November 2018, fellow students were discussing accelerated nursing degree programs. That night Roach researched schools, by January he had enrolled in the prerequisite courses he needed, and just a few months later he was applying to nursing school. In 2020, he enrolled at Duke University’s School of Nursing, where he graduated with a bachelor of science in nursing degree the following year.

Now, nearly three decades since leaving New Haven with a business degree in hand, Roach, 56, is back at Yale where he’s studying to be a family nurse practitioner at the Yale School of Nursing.

“Medicine has always interested me,” said Roach. “It seemed like I kept going back to medicine and caring for people. I thought nursing fit really well for me.”

Roach, who started taking classes at the nursing school last summer, says there are two reasons he decided to return to New Haven. One was his history with Yale. “New Haven is like a second home,” he said. The other was because Yale School of Nursing offers an opportunity that most nursing schools don’t: the ability to apply to the master of science in nursing program without on-the-job experience.

Roach is pursuing his master’s degree while working full-time as a nurse in Yale New Haven Health’s Emergency Medicine Department.

“The Grand Canyon is where I got a taste for emergency care,” he said. And emergency medicine is ultimately where he’d like to end up once he has his master’s degree.

The draw for him, he said, is the problem-solving. Working in an intensive care unit and a burn center during his time at Duke left him wanting more. In those settings, he said, he and his colleagues were managing patients’ care and treatment plans, not developing diagnoses. “I wanted to be more on the diagnosing side.”

In an emergency department, where patients arrive with a dizzying range of symptoms, he has the opportunity to help figure out what’s causing them. “I definitely like the figuring out part,” said Roach.

Roach says he can trace that love of problem-solving back to his years working on the trading floor. People often wonder about his drastic career change and how different this new line of work must be.

“But it really isn’t much different,” he said. “Whether you’re in the hospital or on the trading floor, your job is to focus on your patient or client and tune out the noise. You have to make important decisions and people are relying on your advice.

“So I find the hospital environment to be reasonably similar to what I experienced in banking. At the end of the day, it’s just people with problems. And you’re trying to solve them quickly.”

Roach plans to apply for an emergency medicine residency once he gets his master’s degree. But he’s keeping an open mind about his next steps.

It’s a mentality that has served him well.

Roach has faced a number of personal challenges over the past few years. And he acknowledges that the transition between his two careers was quite difficult at times; often he felt disconnected. “It took a few years to figure out that health care was the right path for me, but I’m very happy now,” he said. “And I want people who feel the way I did in my first career to know that it’s worth making a change even if it’s scary.”

But there might be something less tangible at play, too.

“There were things about my life that were good when I was at Yale the first time,” said Roach. “And now that I’m back here, it’s all good again. Is it Yale? I don’t know. But I feel like the person I was when I was here before. It’s great to be back.”