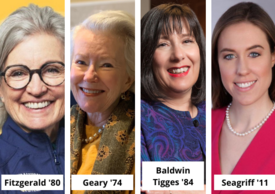 Yale School of Nursing (YSN) is delighted to announce the 2022 winners of the Distinguished Alumni Award: Shannon Fitzgerald ’80 MSN, Mary Geary ’74 MSN, and Beth Baldwin Tigges ’84 MSN, PhD. YSN is also thrilled to recognize Dr. Nicole Seagriff ’11 MSN, DNP as the second winner of the Decade Award, a salute to impressive achievements early in her career.

As a Distinguished Alumnus, Shannon Fitzgerald ’80 MSN has practiced in urban hospitals and rural clinics in the middle of the Nevada desert, and she loves primary care now as much as she did on graduation day. Mary Geary ’74 MSN started her multifaceted nursing career at the age of 15, volunteering to administer polio vaccines in Louisiana. Beth Baldwin Tigges ’84 MSN co-developed and led psychometric-testing of the first set of scales to measure organizational mentoring climate and an observational rubric for scoring mentors’ behavioral interactions with mentees.

Decade Award winner Dr. Nicole Seagriff ’11 MSN is a two-time breast cancer survivor and founder of The Pink Agenda, a 503 (c) that has raised millions of dollars for breast cancer research and care. In her spare time, she also recently climbed Mt. Kilimanjaro.

The Distinguished Alumni Award was created in 1973, and more than 100 alumni have been honored in the nearly 50 years since.

“These outstanding YSN alumni have demonstrated incredible dedication to nursing and made unique contributions to the nation’s most trusted profession,” Hartch said. “They are not only exemplary nurses, but also leaders in their communities.”

A graduate of the Community Health MSN/FNP track, Fitzgerald counts her time at YSN as the foundation of a fascinating career anchored in continuous clinical practice, ranging from urban pediatric hospitals to small town clinics and rural clinics in the middle of the Nevada desert. She’s currently practicing part time at Bainbridge Pediatrics and still loves primary care now as much as she did in 1980.

Hired as the first Chief of Advanced Practice at Seattle Children’s Hospital, Fitzgerald spent 15 years developing teams of nurse practitioners and physician assistants in every department and inpatient area and tripled the APP workforce. With a stellar team of leaders, she started a large post graduate fellowship for APPs that transformed clinical practice and created opportunities for teaching and mentorship. She became a member of Board of Directors for the National Nurse Practitioner Residency and Fellowship Training Consortium when she left her role at Children’s in 2019. She serves as an accreditation site visitor, and advocates for rigorous standards for post graduate training for NPs and PAs.

Starting with her days at YSN, Fitzgerald has been dedicated toward the removal of unnecessary barriers to practice for NPs. In the 1980s in Nevada, she worked toward prescriptive authority and equitable third-party reimbursement for NPs and continued similar work in Washington state. She served two terms as a member of the Washington State Nursing Care Commission, including 4 years as Commission Chair, and was delighted to participate with nursing advocacy organizations to eliminate the last barrier to full prescriptive authority in Washington state.

Together with her husband, Ken Elam, Fitzgerald founded a small NGO in Zambia that has been providing family planning and gender-based violence recognition and referral services since 2007.

At 15, Mary Carroll Geary volunteered to help administer the Sabin polio vaccine in Louisiana. And now, over 50 years later, she volunteers to administer COVID-19 vaccine in Oregon. In between, her career has taken her from surgery to psychiatry, from teaching to consulting, and from bedside care to the executive suite in several hospitals.

Geary was born in Derby, Connecticut, but grew up Ohio and Louisiana. She completed her BSN at the University of Southwest Louisiana where she was President of the Student Nursing Association. After marriage, she and her husband moved to New Haven, where he pursued graduate studies. There, she worked first at Yale New Haven Hospital in surgery and then at the Yale Psychiatric Hospital before graduating from YSN in 1974.

In retirement, Geary serves as Vice-Chair of the Board of Directors of Saint Francis Medical Center in Trenton, a safety net hospital. Mary served as President of the YSNAA where she focused tremendous effort into mentoring programs. For many years she has been the featured speaker of a popular negotiation skills seminar for graduating students. During her tenure, the Newborns in Need program was remarkably successful, winning numerous awards within the Yale community. Her publications include Possibilities: Insights and Wisdom from Women Who Combined Marriage, Motherhood, and High Professional Achievement(2017).

Dr. Tigges is a Regents’ Professor at the University of New Mexico College of Nursing, in Albuquerque, NM. She is an experienced academician and researcher and has led or co-led multiple U.S. National Institutes of Health (NIH) interdisciplinary initiatives to address knowledge gaps in research infrastructure, team science and mentoring; these projects culminated in publications and new structures to facilitate collaboration and implementation of best practices in working in diverse teams.

Dr. Tigges has given over 20 presentations around the world discussing the application of the science of team science to leading teams in nursing. She has promoted the concept that leadership should be a priority for all nurses, regardless of role or seniority. She co-developed and led psychometric-testing of the first set of scales to measure organizational mentoring climate and an observational rubric for scoring mentors’ behavioral interactions with mentees.

She is an expert in the evaluation of NIH interdisciplinary research centers and co-chaired NIH’s Clinical and Translational Science Award Consortium’s Program Evaluators’ Group, comprised of evaluators from over 50 NIH-funded sites, for the past four years. For over 25 years, Dr. Tigges held elected leadership positions in Sigma Theta Tau International, most recently as President from 2017-2019. Along with many other esteemed colleagues, she was part of a pivotal leadership group that contributed to Sigma’s global growth to over 570 chapters in 37 countries and collaboration with partners worldwide.

Dr. Tigges received her BSN from Pennsylvania State University, her MSN from Yale University, and her PhD in Sociomedical Sciences from Columbia University.

“The pilot of the Decade Award was so popular in 2021 that it was enthusiastically brought back this year,” said Hartch. “It is our pleasure to recognize Dr. Nicole Seagriff with the 2022 award, and we salute her dedication to underserved communities and to the nursing profession.”

Dr. Nicole Seagriff graduated Boston College with a Bachelor of Science in Nursing in 2007 and then started as an RN in the Medical ICU at Yale New Haven Hospital, completing her Master of Science in Nursing degree at YSN in 2011 to become a Family Nurse Practitioner. While at Yale she recognized the need for access to primary care services for underserved patients and completed an additional year of training through the nation’s first nurse practitioner residency program at The Community Health Center, Inc (CHCI) in 2012.

As a primary care provider at CHCI for the past decade, she concurrently serves as the On-Site Medical Director of the Norwalk and Stamford locations, managing clinical operations of three health centers and serving as the Clinical Program Director of the National Nurse Practitioner Residency Program. In 2016 she earned her Doctor of Nursing Practice degree from Duke University with a focus on genetic testing for breast cancer mutations in underserved populations. She then became the Clinical Program Director overseeing clinical aspects of the Nurse Practitioner Residency Training Program.

Diagnosed with breast cancer twice before age 35, Dr. Seagriff is also President of The Pink Agenda, a 503(c) dedicated to raising money and awareness among young professionals for breast cancer research and care. Since its inception, The Pink Agenda has raised nearly $7 million and reached over 1,000 participants through its Speaker Series and other events.

In 2011 she discovered she had a BRCA2 mutation, which allowed her to seek high-risk screening and discover early-stage breast cancer later that year. She was treated at Memorial Sloan Kettering by the same surgeon who treated her mother 10 years prior. In the summer of 2020, she was found to have a reoccurrence of an invasive breast carcinoma. During the COVID-19 pandemic she underwent surgery, chemotherapy, and radiation and is currently on hormone therapy.