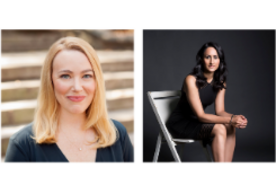 Dr. Pritma Dhillon-Chattha ’18 DNP, MHA, RN and Dr. Brighid A. Gannon ’18 DNP, PMHNP-BC first connected as classmates at YSN in the Doctor of Nursing Practice (DNP) program. Dhillon-Chattha owns a cosmetics injectables company among other ventures, and Gannon founded Ivy Psychiatry, a nursing home consulting group in New York comprised of 14 psychiatric nurse practitioners. The good friends had discussed going into business together once or twice but never made a move. Then COVID-19 rocked New York.

Responding to an Emerging Crisis

Dhillon-Chattha and Gannon had their first conversation about launching Lavender, an online psychiatry and therapy office, on March 24 and the site went live just 45 days later. The speed is especially impressive considering that even though Lavender only operates in the state of New York, founder Dhillon-Chattha operates from Calgary in Alberta, Canada.

“We recognized that there was a time-sensitive need,” Gannon said. “New York was literally in crisis. Part of our mission was that we wanted to help people as soon as possible. We wanted to launch quickly, even if things weren’t perfect.”

Gannon mobilized the nurse practitioners of Ivy Psychiatry as the providers, and Dhillon-Chattha drew on her experience with clinical informatics to accomplish the technology goals.

Despite the time pressure, the partners were determined to make Lavender a warm, welcoming place, and to avoid what they identified as common barriers for patients seeking mental healthcare.

“So many of my colleagues are fully booked and have no more referrals,” Gannon said. “Many providers don’t offer email as a method of contact, and getting a hold of them by phone is near impossible. There’s no pricing transparency, and no one will tell you how much these services actually cost. What a shame that when you’re already feeling down and struggling that the process of accessing mental health services is re-traumatizing.”

A Unique Model of Care

At Lavender, inquiries are answered on the same day, sometimes in as little as 30 minutes. Contact information and even a live chat feature are available to answer questions. Clients can book a new session with just a few clicks, and pricing is presented up front. Lavender charges about 30 percent less than other psychiatry providers in the city, according to Gannon.

Dhillon-Chattha and Gannon chose the name Lavender to inspire feelings of calm, and selected website images that show happy, high-functioning people going about their daily lives. They wanted to help normalize mental healthcare and reduce the stigma around it. The care model allows clients to book sessions on their own schedule and providers to sign up for the hours they want. Providers are also quarantining at home and adding capacity back into psychiatry services to meet rising demands, booking patients for appointments sooner, and offering greater flexibility for appointment times.

“Telehealth has been a viable option for many years, and now the system is being forced to embrace it,” Dhillon-Chattha said. “COVID-19 has accelerated the adoption of telehealth by at least five years. This will help seniors, rural patients, and those with different abilities safely access the care they need.”

The model’s concept of collaborative rounding is another efficient capability for clients and allows for continuity of care between therapy groups, typically made up of psychologists, social workers, and psychiatric nurse practitioners. A psychiatric nurse practitioner from Lavender joins the last 20 minutes of a therapy session to coordinate the medication treatment plan with the therapist and client.

In addition to booking patients who were already in treatment before the pandemic began, Lavender’s clients also include people whose mental health needs developed during COVID-19.

“Human beings are not built to maintain levels of stress and uncertainty like this,” Gannon said. It’s understandable that more people, now more than ever, are really struggling.”

“Nurses are entrepreneurs at their core, because they’re problem solvers.

“We knew we had the means, we had the people, and we had the tech savvy to do this,” said Dhillon-Chattha.

The partners also knew what they needed, drawing on previous experience, partnerships, and networks to tighten the production timeline and go live quickly. “In some cases, we were building the plane as we were flying it,” Dhillon-Chattha said. “But we never wavered on our high standards of confidentiality, compliance, and care.”

When giving advice to other nurses seeking entrepreneurial opportunities, Dhillon-Chattha points out that “Lavender works because Brighid and I are different. Don’t partner with someone exactly like you: talk to a nurse with a different skillset and a different journey.”

“There’s so much that needs to improve in our health care system,” Gannon said. “COVID-19 has exposed so much of that. And sometimes it’s really nice to partner with someone who isn’t directly in the industry. Pritma can ask ‘Why is it done that way?’ And maybe the answer is ‘We’ve always done it that way,’ but we don’t have to anymore.”