Food as a Healing Agent 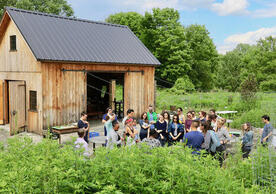 The Yale School of Nursing (YSN) is a five-minute walk from the Yale Landscape Lab (YLL), and that proximity has forged a symbiotic relationship between the West Campus neighbors.

Michelle Kennedy ’05 MSN, APRN, enjoys bringing Graduate Entry Prespecialty in Nursing (GEPN) students into the urban farm during her Community Health class as part of a curriculum that she and YLL Director Justin Freiberg have been refining for years. YLL runs the farm as well as a number of different spaces for teaching, research, and community building across the 136 acres of Yale West Campus.

Kennedy challenges the GEPNs to create recipes for hypothetical case patients, such as a 15-year-old pre-diabetic. Kennedy encourages the students to design a dish that would be similar to what the patient was already eating, making the transition to healthier choices more appealing. One group of GEPNs came up with mini pizzas made of polenta “crusts,” fresh basil, tomatoes, and spinach, plus grilled onions. The only non-garden ingredient was a sprinkling of cheese on top.

Freiberg fosters a welcoming environment for all the health sciences at Yale, especially through the Yale Cultivate Health program, and he highlights the unique role of nurses and midwives.

“Nursing students are so hugely important to the health of our country,” Freiberg said. “Given the unique partnership we stand to build together, and the incredibly thoughtful students that end up at YSN, there is the potential to collaboratively build programming that changes the way they work with their patients around food and health.”

Freiberg says visitors are tangibly interacting with the food they recommend to patients. “They are not only cooking but harvesting as well,” Freiberg said, and considering which specific dishes are most likely to create behavior changes. Students discuss patient budgets, cultural norms, and how to make dietary and nutrition updates attractive. And each year, a handful of YSN students devote extra hours to the YLL as interns, further exploring the interconnections between the missions of the two organizations.

Kennedy typically offers her class in the spring, but there’s no reason to wait and miss out on produce that peaks later in the year. These seasonal suggestions can be enjoyed by everyone, and Kennedy recommends incorporating as many garden ingredients as possible into a bountiful bowl worth sharing. “I definitely just got hungry thinking about eating this,” Kennedy said.

YSN students have a history of interest in similar topics, and Vanessa Correia ’19 MSN was awarded a Certificate of Outstanding Recognition in Appreciation for her sustainability work. Correia demonstrated dedication to healthy principles through the program “Nutrition That Heals.”