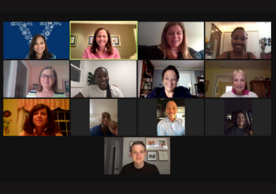 The Yale School of Nursing (YSN) Alumni Board recently shared leadership changes for the current and upcoming terms. The board partners with YSN alumni, current students and faculty, and the Yale Alumni Association (YAA).

“I am thrilled to announce that current YAA Delegate Elyssa Noce ’17 MSN was unanimously approved by the alumni body as President-elect,” said current President Christa Hartch ’02 MSN, RN. “I am confident we are in very capable hands under her leadership.” Noce will serve as President from 2022 to 2024.

Hartch also announced that Courtney Farr ’06 MSN, FNP, APRN-BC as the new Yale Alumni Association Delegate for the 2021-24 term and praised Farr for her willingness to serve as a representative of YSN within the greater Yale community.

“Courtney is an outstanding YSN citizen and a great example of how to explore all areas of the Yale network even beyond YSN,” Hartch said.

“This combination of talent lends a wonderful perspective to our board, and I am thankful to all our new leaders and to the existing Board of Directors for all their hard work. It has been a privilege to serve alongside these very impressive and committed Yale nurses,” Hartch said.

The Alumni Board of Directors generally works toward several goals. These include furthering the school’s mission of better health for all people and strengthening YSN interests; promoting professional standards and educational advancement of nursing; promoting fellowship among YSN alumni; supporting collaboration between the student and alumni communities; and increasing the visibility of the school within Yale.