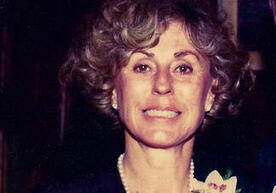 Roger Lee ’94 recently made a $5 million gift to Yale School of Nursing (YSN) to honor the legacy of his mother, hospice nursing pioneer Gayle Lee, RN, MHA. The extraordinary commitment is Lee’s first to YSN and the second-largest single contribution in the school’s nearly 100-year history.

“This gift is the intersection of two things that mean a lot to me: my mother and Yale,” Lee said. “I would not be in the position to do this but for the fact that Yale made a bet on me 24 years ago, and I want to pay that back as best I can.”

Gayle Lee founded the Cancer Support Team, one of the earliest hospice programs in the country. Her work matches YSN’s expertise in this area, as former Dean Florence S. Wald first introduced the hospice model to the United States.

“My mother saw the inadequacies of the existing model for end-of-life healthcare and patient support and wanted to do something different,” Lee said. “She recognized that these patients were at the most vulnerable and challenging point of their lives, and she wanted to make their final days as comfortable as possible.”

“It’s a very different skillset to serve someone who is terminally ill versus providing other kinds of care. It requires a certain delicacy to work with patients who know they have limited time left. Her ability to connect and make them comfortable was her real calling.”

Lee’s father—John Lee ’58, for whom Yale’s basketball facility is named—is recognized for his athletic prowess and leadership skills. Gayle’s trailblazing took a different shape but made no less of an impression on Roger while growing up.

“I have these memories of going off with her to visit patients, and I knew the work that she did was important,” Lee said. “She was really a leader and an innovator in her own right. When she started the first hospice in New York in the mid 1970s, it was a very controversial new way of thinking about healthcare and patient service. I was always inspired by her dedication to others, and she set a strong example for a lot of the things I’ve tried to do in my own life.”

The gift’s blend of endowment and current-use funds will support online education, faculty teaching, and research, especially as it relates to palliative care and the Dean’s Discretionary Fund.

Plans are currently under way to dedicate the student hub space to Gayle Lee later this year, in person if Covid restrictions allow.

“I hope that it can galvanize more support for the nursing school during the ‘For Humanity’ campaign,” Lee said. “If there’s one thing we have all learned during Covid, it’s how vital a role nurses play. Improving the resources and opportunities Yale nurses have is a great use of this gift.”