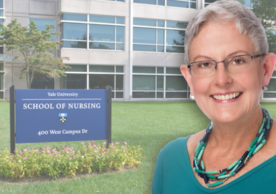 Holly Powell Kennedy, an internationally renowned midwifery investigator and educator at Yale School of Nursing, will serve as the school’s interim dean while the university conducts a search for a successor to outgoing Dean Ann Kurth, President Peter Salovey recently announced.

She will begin serving as interim dean on Jan. 1, 2023, pending approval by Yale’s board of trustees. Kurth, who has served as dean for seven years, will step aside at the end of the fall semester to assume a new position as president of the New York Academy of Medicine.

Kennedy has been part of the Yale faculty since 2009 when she was appointed the university’s first Helen Varney Professor of Midwifery.

“She brought to Yale decades of experience leading research initiatives and clinical practice, teaching future practitioners and scholars, and informing health policy decision-making,” Salovey wrote in a message to the YSN community. “Building on her contributions to the fields of nursing and midwifery, she shaped a research program at Yale that studies and provides solutions to challenges in maternal-child health care in the U.S. and across the world.”

During her career, Kennedy has focused on addressing the prevailing lack of trust in clinical care and fear of childbirth. She has found linkages between how care is provided during pregnancy and birth with clinical and social outcomes.

Her work has contributed to numerous policy and clinical practice changes, Salovey wrote. For example, she developed a conceptual framework of midwifery care that reflects the relationship between the woman and the midwife and enables the midwife to create an environment of care to meet the woman’s needs. She helped establish the concept of “optimality” in maternity care, which maximizes the health outcomes of the mother and child with minimal obstetrical and medical interventions that can lead to complications or prolonged recovery periods. She also played a leadership role in developing the Quality Maternal and Newborn Care Framework, an evidence-based scope of care to improve health outcomes.

As a globally recognized leader, she has received many honors and served in a number of organizations, including as a past president of the American College of Nurse-Midwives (ACNM), the professional association representing Certified Nurse-Midwives and Certified Midwives in the United States. In 2016, she received the highest honor bestowed by ACNM.

Prior to coming to Yale, she was on the faculty at the University of Rhode Island and the University of California, San Francisco (UCSF). In 2008, she was a visiting faculty member at King’s College London as a distinguished Fulbright Fellow. Earlier in her career, she served more than 30 years in the U.S. Army Nurse Corps (active and reserve) and is a retired colonel.

In her new role as interim dean, Kennedy will work closely with Carmen Portillo, executive deputy dean and professor of nursing, who will lead the transition team.

“Professor Portillo’s leadership at the school is instrumental to the success and progression of many programs, including faculty, curricular, organizational, and clinical partnership work, and I appreciate deeply her willingness to guide the transition,” the president wrote.

Portillo, an internationally recognized Hispanic nurse leader, is former president of the National Association of Hispanic Nurses and co-founder of the National Coalition of Ethnic Minority Nurses Association, Inc. Before coming to Yale, she worked closely with Kennedy at UCSF, where they led the Diversity in Action initiative with faculty, staff, and students.

Salovey has formed a search advisory committee to identify candidates to replace Kurth.

In his message, he thanked Kurth for her leadership at the school. “I am grateful to Dean Kurth for her exceptional service to the school and Yale,” Salovey wrote. “In partnership with faculty, staff, students, and alumni, she has expanded YSN’s global reach, increased access, and further enhanced the excellence of the school’s research and teaching programs.”

The president invited YSN students, faculty, and staff to share with the advisory committee recommendations for potential candidates or suggestions about the qualities and qualifications that should be considered for the next dean.