A Sprint and a Marathon: Nursing Leaders from Across CT Debrief COVID-19 Strategies at Bellos Lecture 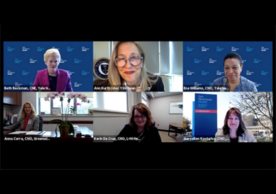 Yale School of Nursing (YSN) held its annual Sybil Palmer Bellos lecture on April 19, virtually convening a panel of nursing leaders from hospitals across Connecticut to analyze how they strategically prepared their nurses for both the sprint and the marathon of the first two waves of COVID-19.

“There was a fireball coming up 95, and we knew if we didn’t move quickly, we would be in flames,” said Chief Nursing Officer (CNO) of Yale New Haven Hospital Ena Williams, MBA, MSM, BSN, RN, CENP, describing the oncoming virus as it swept through neighboring New York.

Dean Ann Kurth, ’90 MSN, PhD, CNM, MPH, FAAN moderated the conversation “2020: The Year of the Nurse and COVID-19—Leadership, Innovation, and Beyond” among Williams and four other nursing administrators:

As Beckman pointed out, the nursing community has seen pandemics before: AIDS, SARS, MERS, and the Swine Flu. But COVID-19 was new and mystifying.

“COVID was like a chameleon taking on many different looks,” Beckman said. “Our asymptomatic spreaders were invisible and blended in … silently present and doing untold damage. Conversely, others presented with vivid, impressive, and terrifying clinical sequela, like nothing we had ever seen.”

Beckman talked through labor force challenges such as the sidelining of student nurses, the dearth of ICU nurses, and travel bans that prevented visiting clinicians.

“If you had a nursing license, we wanted you to work in some capacity,” Beckman said. “Some nurses hadn’t worked bedside in 20 years.”

Beckman also described setting up testing and vaccination enterprises in a matter of days and touted strong partnerships with the local community as both essential and inspirational.

Williams detailed innovative practices at YNNHS, which was one of the first systems in the nation to reprocess face masks. Nurses cut disinfectant wipes into quadrants to make them last longer during PPE shortages, and a website was created to share best practices and updates in a central location. Even though it was ultimately not needed, a ventilator design was successfully tested to support two patients at once.

Williams also described meticulous tracking of beds, PPE, and staff across the system.

Cerra stressed the importance of communicating early and often with all stakeholders while building trust through transparency, honesty, and confidence.

“We knew we would prevail, as our patients, our community, and our staff were depending on us,” Cerra said.

Greenwich was swamped early in the first wave and was unable to prepare for the volume of patients who rapidly filled an inadequate number of ICU beds.

“What quickly became clear is that we went from fireproofing to firefighting,” Cerra said.

Cerra also commented on the agility and risk-taking required during the crises. “Perfection was not an option,” she said. “Good had to be good enough.”

As the established surge strategies quickly became insufficient, Da Cruz and her team jumped to the first of multiple backup plans.

“The only thing we knew for certain about our plans was that they would change,” Da Cruz said.

Conference rooms, auditoriums, and cafeterias were converted into clinical spaces. Telemedicine became quotidian. Staff Zoomed in from home and iPads were supplied throughout patient floors.

In her remarks, Da Cruz emphasized the integration of data into decision making and using labor pool systems to help staff the right nurse in the right place at the right time.

“Traditionally, nurses don’t usually like to float at two different units, let alone two different hospitals in different states,” Da Cruz said. “But they did, and they raised their hands to do it.”

Kosturko named trust, adaptability, and innovation as guiding principles in Bridgeport. Her team pursued simple solutions to complex problems, including clearing the shelves of every baby monitor at the local Walmart and Target to use for patient observation.

IV pumps were placed outside critical care rooms to minimize exposure and mirrors were positioned outside patient rooms so that nurses could visually check their PPE before entering. Nurses used a buddy system, too: a nurse in full PPE inside a patient’s room could convey needs to a nurse runner on the other side of the door.

Kosturko also described erecting a 31-bed field hospital in a hospital parking lot and dedicating a larger hospital to COVID patients and a smaller hospital to elective procedures and other non-COVID needs.

Caring for the Caregiver

The nursing executives all described the incredible emotional and physical toll COVID-19 took, and continues to take, on nurses.

“It was heartbreaking to have patients dying without family [present],” Beckman said. “So many family members were afraid to come in, even at the end of life.”

Kosturko relayed that one nurse, while in full PPE holding an iPad up to a ventilated patient in the ICU, could feel sweat running down his back and tears streaming down his face at the same time.

Kosturko said the work was physically and emotional exhausting, especially during the first wave when the pace of work was so fast and patient progress so slow without a solid treatment plan.

Cerra, who has conducted post-doctoral research on resiliency, highlighted compassion circles, rabbinical visits, and using a pause and moment for mindfulness at the start of meetings as tools they have implemented.

The nursing leaders highlighted teamwork across units, systems, and communities as vital to beating back the virus.

“What saved us was each other,” Beckman said. “It really is amazing what you can do when you have to.”

About the Bellos Lecture

Established in 1964, the Bellos Lecture honors YSN Class of 1927 graduate Sybil Palmer Bellos. She led an exemplary nursing career, working with immigrant families in New York and holding several leadership positions in New York and Connecticut. Each year, the Bellos Lecture features at least one remarkable individual who epitomizes dedication to expanding the frontiers of healthcare.

To watch the full video of this event, visit the YSN YouTube Channel.